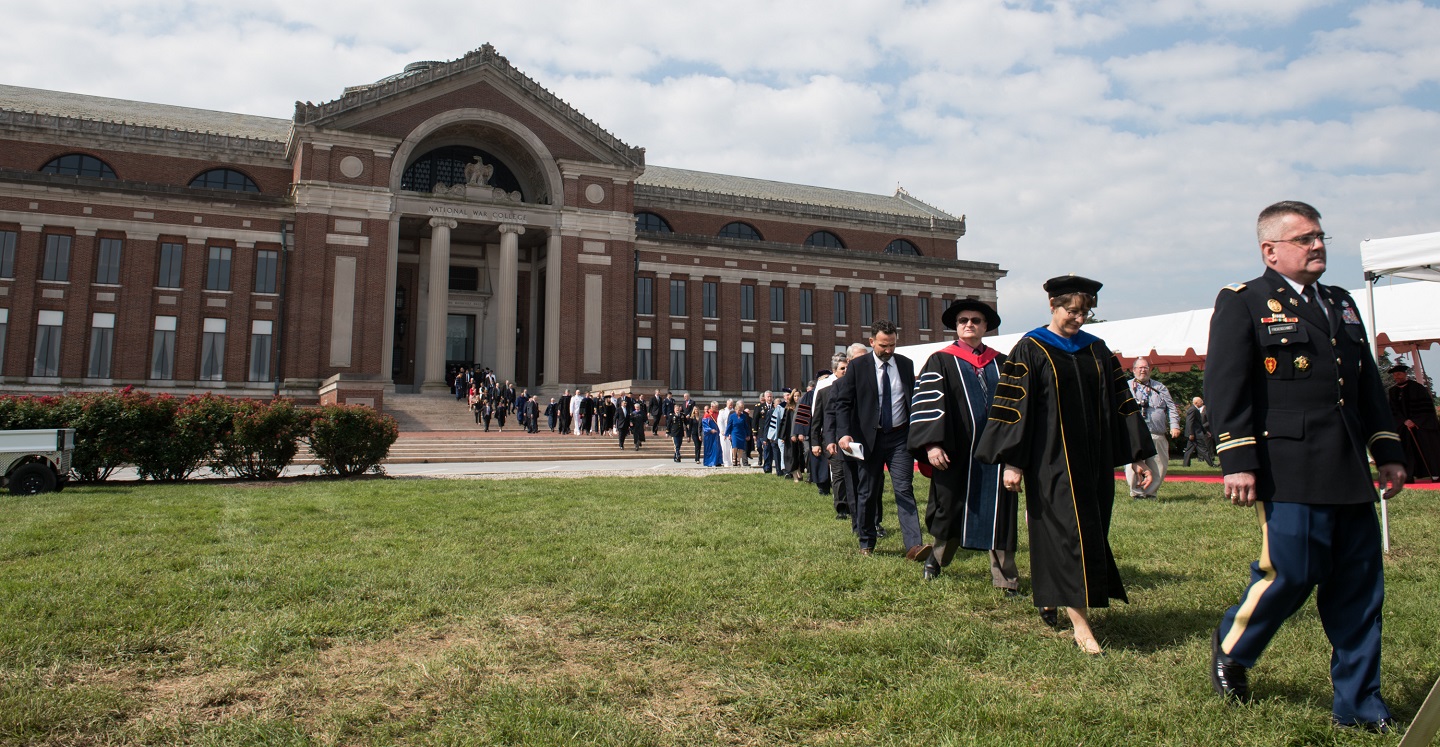 War College students are at a point of significant departure in their careers, as their post-study assignments will generally put them in rapid-paced, constantly shifting circumstances.

For this Whiteboard we reached out again to several scholars with the following prompt:

What is the most important thing a war college student should learn in their year of study?

When people unfamiliar with professional military education ask me what a war college is, my shorthand answer is a liberal arts school that focuses on warfare. While the liberal arts and warfare may seem an incongruous pair, that combination lies at the heart of the war college mission.  Our students come to us well advanced in successful careers across a wide range of specialties. They have reached the point in their careers, however, where their service, organization, or nation has decided that to be successful in the more senior positions they are on-track for, they need to move beyond their specific skill-set and start thinking more broadly about the wider defense and national security enterprises.

The goals of a liberal arts education are many:  to build critical, creative, and collaborative thinkers; to encourage an openness to new ideas and different perspectives; to produce leaders who know how to learn and how to evaluate complex arguments; to nurture adaptable decision makers skilled in communicating potential solutions.  If I had to summarize this list into one attribute—or single out a trait that is fundamental to the others—I would highlight intellectual humility.  Intellectual humility is the ability of a thinker to accept the limitations of their experiences, knowledge, and insights; to embrace diverse viewpoints; to have the courage to admit how they have been wrong; to communicate in ways not designed to “win” arguments, but to get to a closer approximation of the truth; and ultimately to recognize the need to make decisions in the face of inevitable uncertainty. Unlike a typical liberal arts school, the problems our graduates will be asked to confront revolve around the use of military force (alongside other instruments of power) to achieve national security objectives.  Hence the war colleges as liberal arts schools focusing on warfare.

There is always a temptation to fill the war college’s curriculum with the pressing threat of the day, the newest technology, or fresh operational concept, but that temptation needs to be tempered by the humbling recognition that we are not training our graduates for their next assignment, but trying to educate them to help solve problems that do not yet exist.  For that goal—I select intellectual humility as the most important thing a war college student can learn—but I could be wrong.

The most important thing a war college student should learn in their year of study is learning how to think more comprehensively about problems.

Because war college graduates focus predominantly on complex problems, students need to hone their ability to identify issues accurately, analyze and assess core elements of problems, and develop options (frequently, not the best, but least worst) to address root causes.

To be able to think more comprehensively about problems, students need to develop a sense of strategic mindedness.  This reflexive ability to think critically and creatively about multiple order consequences within complex-adaptive systems will require students to place issues and decisions in their appropriate historical and cultural contexts.

Establishing such historical and cultural contexts requires asking probing questions that move beyond checklists and first-order enquiries (e.g., 5Ws, How?) to posing open-ended questions that examine second, third, and fourth orders of complexity and consequence.

Using historical context as an example, such questions might include:

What are the origins and development of the issue? How did we arrive at this point in time?

To establish these historical and cultural contexts, students must expand the range of analytical, assessment, and decision-making tools available.  As Henry Kissinger noted, senior leaders mostly expend existing intellectual capital and have limited time to acquire more.  To add intellectual capital during their war college experience, students must acquire, understand, and, most importantly, be able to apply appropriately concepts, models, and theories from multiple disciplines.

Thinking more comprehensively about problems also requires students to foster a heightened sense of empathy.  Students must learn to listen, not simply hear.  They need to learn to explore, examine critically, and set aside their biases while including the perspectives of all stakeholders, especially those of potential or actual adversaries.

Finally, students must recognize that what they learn during their war college experience is only a first step.  After graduation, they must retain, expand, and practice what they have learned.

Students arriving at War Colleges are the best and the brightest of our rising officer corps and civilian counterparts in the national security communities of the United States and partner nations. Excelling at their craft, whether it is serving as a cyber warfare officer for the Air Force or serving in the embassies of Latin America over two decades, characterizes their careers before their arrival, along with confidence in their ability to address the world as they have seen it thus far. The educational benefit they most need in their ten-month experience at a war college, however, is recognizing their future success rides on their overcoming the need to have certainty in future situations they will confront.

War College students are at a point of significant departure in their careers, as their post-study assignments will generally put them in rapid-paced, constantly shifting circumstances. The officers and civilians entering professional military education programs began their careers at the turn of the millennium. The tasks they confronted demanded profound skills and a sense of the science that characterizes engineering, computers, and associated positions, which relatively immediately evidenced success or failure, right or wrong, and seemed to present clear cut conditions, much as one would test a scientific hypothesis.

Those personnel selected for senior level education at War Colleges are highly unlikely ever to see such certainties again. Indeed, if the period after 2000 has any particular characteristic, it is the shocking, unexpected events characterizing the global security environment, whether it was the 9/11 attacks, the 2008 financial meltdown, the pandemic of 2020, or various other instances we can cite.

The forthcoming leaders in all domains of national security here and abroad need to accept the advent of such complexity and ambiguity, rather than fight it. Each of them should recognize the importance of learning the process of analysis (in our case, relative to national security strategy) rather than fixating simply on apparent facts. The past decades proved that knowing facts is important but insufficient to the jobs they will confront. In fact, the lack of certainty proves that so much of their senior level careers will focus on the art of the job rather than the science that helped them arrive at the point senior military education. Those who will be most successful are those who recognize this fundamental role for uncertainty and use it as inherent to their efforts rather than using continuing to look relentlessly for clear cut facts before moving forward. The latter approach rarely works, no matter how personally desirable it may be to someone who has succeeded with certainty in the past.

Photo Description: National Defense University (NDU) Faculty walk out of Roosevelt Hall for the Graduation ceremony at Fort Lesley J. McNair, Washington D.C., June 7, 2018. The NDU Class of 2018 consists of leaders from the U.S. military services, the Department of Defense, other federal government agencies, as well as from the foreign militaries of 66 allied and partner nations.