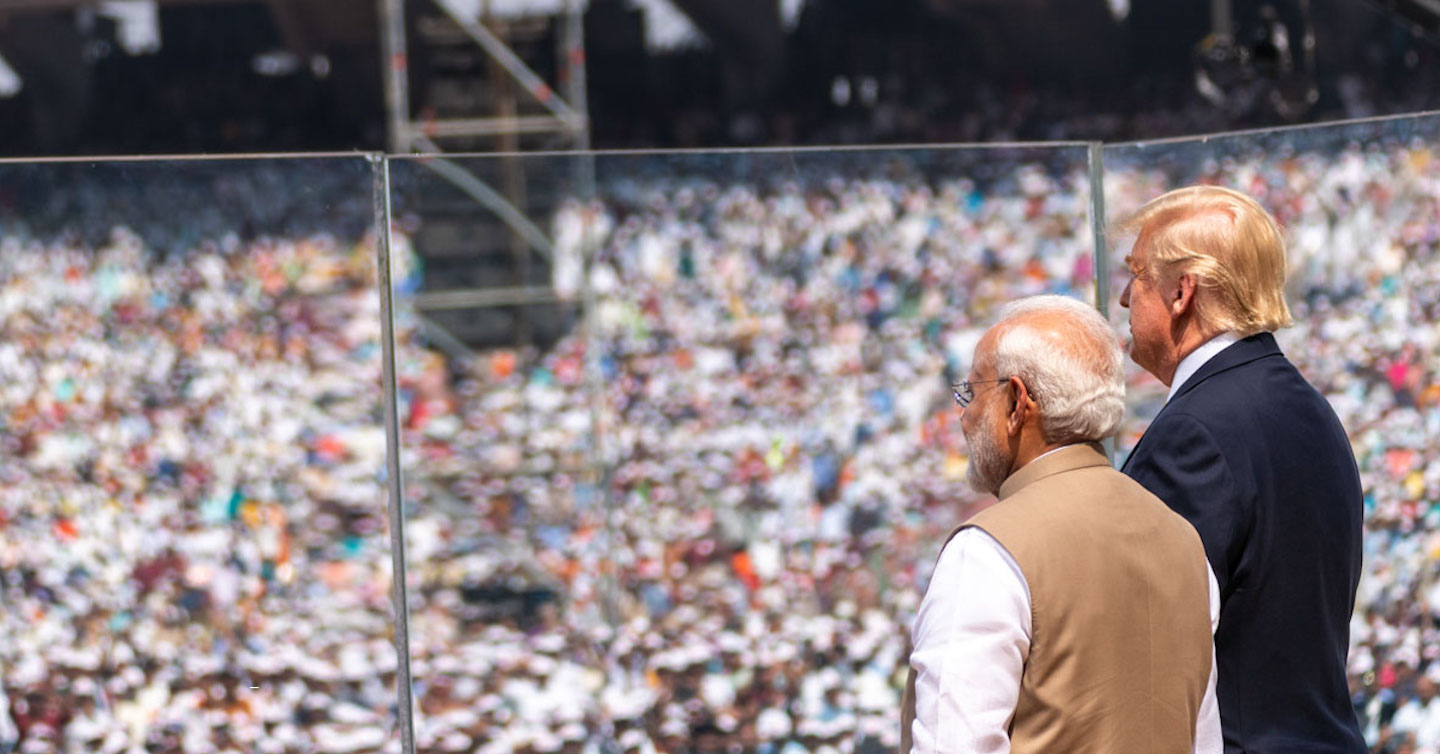 Much of the structure is the same as it was in the late 1940s and early 1950s when the state achieved its independence.

In early 2020, India became a greater subject of interest to American national security professionals as a result of the “Namaste Trump” presidential visit. Beyond the great tamasha, or spectacle, of the visit, important changes to Indian defense are occurring, and Americans ought to pay closer attention. The Indian defense establishment remains in flux. India’s higher-level defense organization still desperately needs reform. Much of the structure is the same as it was in the late 1940s and early 1950s when the state achieved its independence. The dysfunctions of this system have caused problems for India’s security, and have been a hindrance for greater Indo-American cooperation. Still, India is a rising Asian power, and one of the world’s largest arms buyers. In recent years, there are indicators that they are finally implementing some long-debated defense reforms. Consequently, in the past 15-20 years the United States has invested heavily in working with India as a strategic partner, and even went so far as to change the name of Pacific Command to Indo­-Pacific Command. These developments have an outsized influence on the future of India as an American defense partner in the Indo-Pacific in an era of great power competition. India’s successful implementation of defense reforms will do more for building a strong strategic partnership than the large defense sales commentators tend to focus on. A closer look at these trends in India is important to American national security professionals as they engage with this vital region of the world.

Since independence, the Indian higher defense organization has been marked by several structural challenges: a disjuncture between civilian and military leaders, a disjointed structure of military command, a limitation on jointness among the services, and a disorganized acquisition and procurement process. These factors contribute to the common belief that India lacks a strategy or a strategic culture that fosters defense policy planning, as implied in the titles of several books on Indian security policy such as India’s Ad-Hoc Arsenal and Arming Without Aiming. Similarly, commentators normally stress the reactive nature of Indian security behavior, though there are indicators this is changing.

Indian civil-military relations, its ability to operate jointly, and organizational hurdles all challenge the Indian defense establishment’s effectiveness. Civil-military relations are a mixed success story, at best. Unlike many of its neighbors, India has maintained strong civilian control of the military. However,  engineering that civilian control has come at a cost: hampering healthy interactions between civilian and military leaders. Given this “absent dialogue” so aptly analyzed by Anit Mukherjee, most scholars and practitioners see India’s development of a coherent national security strategy formulated by civilian and military leadership as stunted. Beyond the civil-military divide, the Indian military is also not unified. The three services – army, air force, and navy – do not constitute a unified joint force. This deficiency can be seen across a spectrum of defense issues: including the organization of military commands, limited development of jointness, and incoherent acquisition and procurement. Further, this lack of effective coordination goes beyond the military services. India also has a bewildering array of paramilitary and police forces vital to the country’s security. Bureaucratic hurdles also hamper their effectiveness, as seen in the tragic delays in the Indian government’s response to the 2008 Mumbai terrorist attacks. Reform of India’s intelligence, police, and other security services has similarly been fitful and ad hoc.

Since the 1980s at the latest, there have been calls by former military and civilian practitioners and researchers for a chief of defense staff (CDS) to serve as the principal military advisor to the civilian government, while also providing leadership to the three services. Since the 1950s the three service chiefs—Army, Air Force, and Navy—have been co-equals. Any coordination on operations and other matters was done consensually and on a case-by-case basis. Moreover, each service chief serves both as the operational commander of his service and the administrator charged with maintaining and equipping it. This dual-arrangement has not been effective and required informal collegial relationships to function as seen in the 1999 Kargil War After the war, the Kargil Review Committee Report (2000) highlighted the need for better interservice coordination.

The problems revealed in that war led to a serious public debate about reforming India’s defense institutions, based on the Kargil Review Committee Report that identified problems, and the Group of Minister’s Report (2001) that laid out recommendations. In the years immediately after the war limited reforms were carried out, including the establishment of a limited Integrated Defence Staff, and two experimental commands: the Andaman and Nicobar Command (India’s first joint theatre command) and the Strategic Forces Command (the first joint functional command).

The Air Force also argued against the proposed reforms, claiming the top down jointness would make them a supporting service and that dividing up forces into theatre commands violates air power theory.

However, as the years passed by the impetus for reforms dwindled. Explanations ranged from resistance from the services and the civilian bureaucracy to an apparent unwillingness for governments to reform. Arguments against change focused on Indian defense requirements and context. Specifically, given India’s focus on territorial defense, the Army is the dominant service, and the proposed reforms could threaten its privileged position. The Air Force also argued against the proposed reforms, claiming the top down jointness would make them a supporting service and that dividing up forces into theatre commands violates air power theory. While generally pro-reform, the Navy is smallest of the three services, and the rest of the defense establishment largely discounted its views.

Other committees looked into the matter but without effect. Civil and military leaders have continually debated the familiar reforms for almost two decades: demand for a CDS and new functional joint commands for a cyber, special forces, and space. Little has come of these proposals. The 2014 election of Prime Minister Narendra Modi’s Bharatiya Janata Party (BJP) did not bring immediate change. Even though both Modi and his nationalist, right-wing party were seen as more “pro-defense” than their Congress Party predecessors, defense reform was modest during the first five years.

Despite all the fits and starts along the way, following the BJP’s electoral victory in May 2019, the Modi Government announced it would begin acting upon defense reform recommendations. The exact cause of this focus is not certain, but it probably stems from a combination of the BJP’s emphasis on national security as part of its political platform, the growing importance of national security for the government in the wake of tensions with Pakistan, the growing concerns about China, and hopes that integration will cut costs. The Modi government established three new joint functional commands: the Defence Cyber Agency, the Defence Space Agency, and an Armed Forces Special Operations Division. In December 2019, Modi appointed General Bipin Rawat as the new Chief of Defence Staff. This position is the long-needed senior advisor for all military forces and defense preparedness to the Government of India.

What do these recent developments mean for the United States military and bilateral cooperation? Most importantly, these reforms have taken place during a period of improved Indo-American relations. From the 1990s the two countries have taken a series of incremental steps to build a strategic partnership, ranging from military exercises, the 2006 Indo US nuclear agreement and series of other military agreements, including improving interoperability in communications and logistics. The current state of the strategic partnership is a far cry from their non-friendly positions during the Cold War. Back then, the US aligned with India’s adversary Pakistan and India tilted towards the Soviet Union, but generally acted as a leader of the non-aligned movement of states that refused to pick a side in the U.S.-Soviet dispute.

The ongoing reforms could have a positive effect on American policy objectives and operational planning in the Indo-Pacific. First, these reforms will likely improve India’s ability to serve as a regional security provider. However, a caveat is in order. While India has immense capabilities, internal stumbling blocks have hamstrung performance. Only after India manages its internal and territorial security concerns can it help secure its region. If India feels more territorially secure, it will likely start re-evaluating its military missions and doctrines, to include power projection. An India more focused on power projection will make for a better regional partner. Successful reforms will improve the prospects for deeper defense cooperation between Washington and New Delhi. Commentators have noted that at times both the depth and the speed of the growing partnership were hampered by the bureaucratic issues highlighted above.

In theory, the CDS, joint commands, and better integration of civil and military processes and procedures will help overcome these hurdles. These reforms, should they bear out, will mean an India that is more capable and efficient in using its tremendous latent power to improve its own security and to build a stronger security relationship with the United States. It is incumbent American national security professionals to know this story and keep a close eye on how it turns out.