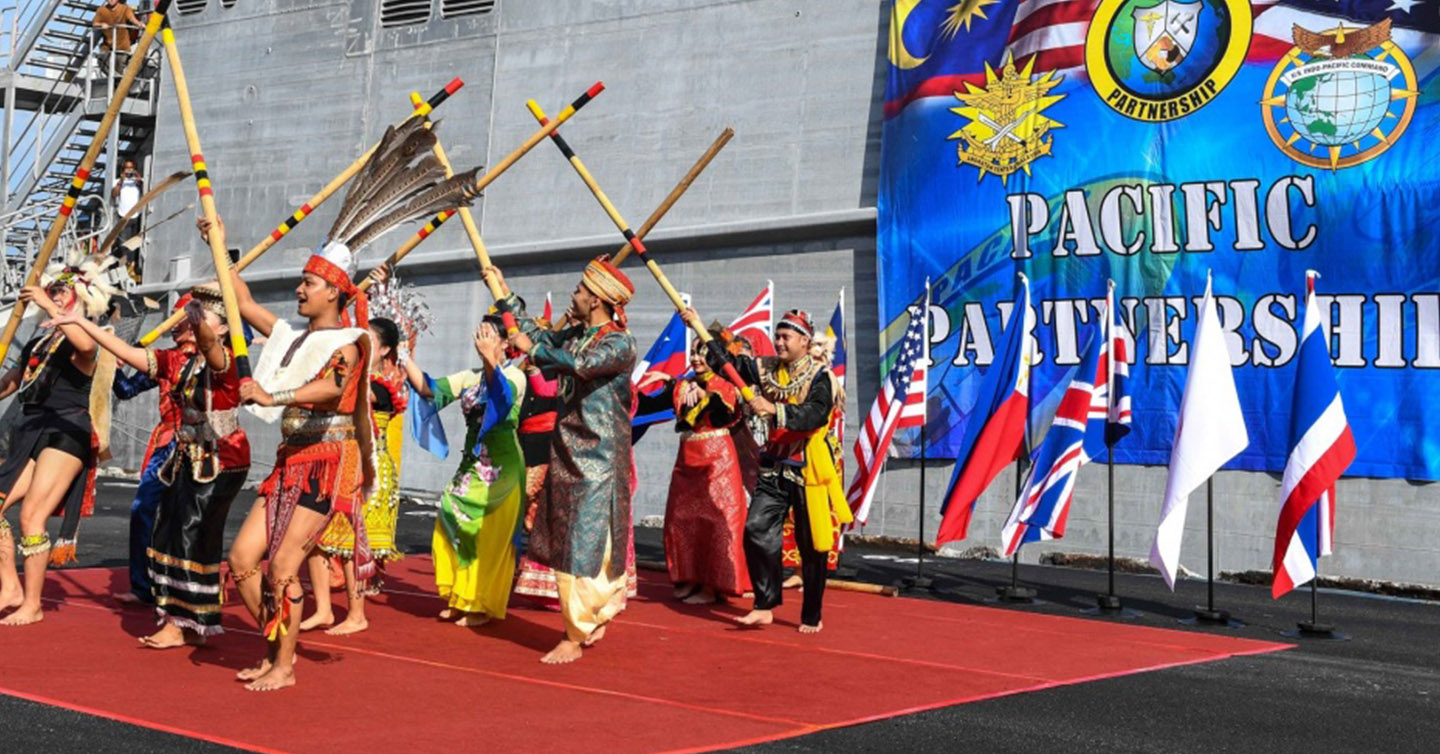 Three visions currently compete for American strategy in the region, but none are likely to succeed

At the beginning of April, West Point pivoted to Asia. Though the Army’s rockbound highland home is 3,000 miles from the Pacific coast, the United States Military Academy recognizes change is afoot. Two recent conferences featured speakers from Asia. First, Alibaba’s communist-capitalist chief spoke on leadership to cadets. A week later, the Department of Social Sciences convened a conference on the strategic dilemmas facing the United States in the region. An increasingly assertive China, powered by economic growth, appears focused on establishing regional hegemony through a plata o plomo approach. To preserve its regional leadership, the United States must offer better alternatives for the region while not forcing regional partners to choose between the two countries. Below, we outline the drawbacks of current strategic frameworks before offering our recommendations for the employment of American elements of national power in the Indo-Pacific.

Three visions currently compete for American strategy in the region, but none are likely to succeed. First, engaging China has not worked. Despite serving as our strategy since Nixon and Kissinger’s famed opening with China, Kurt Campbell and Ely Ratner argued convincingly in Foreign Affairs that engagement failed to mold China into a responsible international stakeholder. The second approach, containment, comes with costs. Though hawkish voices clamor for a new Cold War to contain the Chinese threat, few regional partners appear willing to isolate themselves from Chinese trade.  While the first two approaches seek to counter China, another highlights the risks that accompany a weakened China. With 1.3 billion unhappy citizens, a failed China, would destabilize the region. Not enough attention is paid to China’s many challenges that the U.S. should better understand.

The confusion resulting from conflicting American approaches of engagement and containment in the Indo-Pacific benefits an assertive and ambitious China. While the United States questions the utility of the rules-based order in its internal debate, China stands as a champion of its version of that global order—the one from which it clearly benefits. Xi Jinping’s full-throated defense of globalization at Davos stands in stark contrast to the trade rhetoric of the current administration. To the extent that a “China model” for development and security exists, the Chinese are happy to peddle it, while pointing to the apparent weaknesses of the American model and the manifold failures of the Washington Consensus.

In our estimation, an effective American approach towards the Indo-Pacific will satisfy two conditions. First, it should capitalize on areas of mutual interest with China. Regional stability remains important to both the United States and China, but so does the global challenge of climate change. Both countries rely on trade that requires stability, and both are massive carbon emitters searching for a sustainable model of energy consumption and environmental management. Unfortunately, trade war and renewed competition pushed progress made in bilateral and multilateral climate negotiations by the Obama administration into the background. Not long ago narratives about a G-2 and U.S.-China collaboration had legs. The United States will not maintain its position without some engagement in areas of common interest with the region’s largest power.

Second, the approach must “grow the pie” for our regional partners. Our regional partners will pursue their interests. Rather than forcing a choice, we should apply the classic logic of win-win negotiation, which is, not coincidentally, a hallmark of Chinese messaging in the region. Risk accompanies borrowing Chinese slogans for American strategy, but that risk comes with the opportunity to expose Chinese failures to walk the walk, despite the nice talk. A perfect example is Myanmar’s recent port deal as part of China’s Belt and Road Initiative. U.S. experts helped renegotiate the terms of the deal to save Myanmar $5.9 billion dollars. If the United States can back up its own ability to grow the pie for partners while simultaneously exposing the Chinese efforts to keep the whole pie (or in this case, port) for themselves, then a truly win-win strategy starts to emerge.

The United States will fail by forcing states to choose between China and the United States. A good American policy then should meet both conditions. For the United States to maintain its position in the region, it must capitalize on China’s weaknesses and clearly define the alternative. In other words, simply hoping for the Belt and Road Initiative to fail does not a strategy make. Instead, the United States needs to fix its own branding problem in Asia. The United States should embrace a more comprehensive framing of the “free and open Indo-Pacific” and not shy away from the obvious connections to democracy and human rights.

In this new “free and open Indo-Pacific,” The United States must recognize that its regional partners will deal with China, while we outcompete China in diplomacy, information, security, and economics. Rather than sitting out, the United States must get its hands into multilateral institutions – even those it does not control.

Diplomatically, the United States must show up and turn up. The founding of the Asian Infrastructure Investment Bank (AIIB) is a tangible example of China’s commitment to a robust role for multilateral institutions. Its success is a constant reminder of the self-inflicted wound of the United States not participating. While it is easy to be an ASEAN-skeptic, the organization provides numerous forums ranging from traditional security and economic interests to non-traditional socio-cultural ones. While the United States bulked up its efforts with ASEAN by establishing a permanent mission with an ambassador in 2011, that seat has gone unfilled since January 2017 – a highly visible symbol of low prioritization. Unsurprisingly, the Chinese posted a permanent representative in 2008 and continuously filled the seat since then.

Informationally, the United States should more deliberately compete with China. Our soft power remains a significant competitive advantage over China, both in the region and across the globe. But we need to do more. While Radio Free Asia does great work, recent cuts to its budget weaken America’s largest mouthpiece. While we cut budgets, China places propaganda each week into the Washington Post and outlets across the globe. Acknowledging our society’s strength comes from its openness, we argue for greater engagement. States in the region already recognize that the Chinese model comes with costs. By ditching the name “one belt, one road” for the “belt and road initiative” in English language publications, the Chinese government acknowledged its sensitivity to negative perceptions about its heavy-handed and top-down China-centric approach. Rather than retrench, the United States should reinforce regional perceptions about the limits of cooperating with China by re-establishing the United States Information Agency and pushing the Army’s psychological operations beyond leaflets.

In the Indo-Pacific, the United States remains the military partner of choice. Even adversarial nations turn to the United States when they need help. After the Filipino city of Marawi fell to insurgents in 2017, President Duarte sought and got – not Chinese, but – American advisors and assistance to recover the city. Likewise, U.S. troops supported Nepal after its earthquake in 2015 and Indonesia after its tsunami in 2018. These humanitarian and political missions underscore the large U.S. presence in the region—a presence that is supported by long-standing exercises, education programs, and an expected increase in arms sales.

However, the United States should engage China militarily in a more robust way. The restrictions emplaced on the Department of Defense by the Congress via the National Defense Authorization Act of 2000 (NDAA 2000) still allow for much broader contact between the People’s Liberation Army and the U.S. military than what currently occurs. Given that the 2018 National Defense Strategy says that “the most far-reaching objective of this defense strategy is to set the military relationship between our two countries on a path of transparency and non-aggression” there should be a whole lot more happening than what the annual “China Military Power Report” lists. That report fits those engagements onto a single page, many of them academic delegations limited in time, scope, and impact. The Department of Defense could do more in the way of exercises, academic exchanges, liaison officers, and even negotiations on unplanned encounters. The oft-highlighted example of Chinese involvement in the Navy’s keystone RIMPAC exercise is the tip of the iceberg when it comes to missed opportunities on this front. While the restrictions in NDAA 2000 could use a full overhaul, the military could achieve more “transparency and non-aggression” within the current framework.

Economically, the United States has taken important steps, but the narrative casts us in a negative light. After the United States stepped away from the Trans-Pacific Partnership, China’s Belt and Road Initiative investments have dominated the scene. However, BRI’s $8 trillion headline figures are certainly overstated and could be as low as $340 billion. However, U.S. and partner efforts in the same space are overlooked. The Overseas Private Investment Corporation (OPIC) underwrites $3.8 billion in foreign direct investment to U.S. strategic priorities in Asia. The BUILD ACT, passed in 2016, will strengthen OPIC’s efforts by doubling its investment cap and allowing new investments that aim to crowd in U.S. investment. Effort by American partners – such as Japanese investment in “quality infrastructure” – demonstrates how American partners also provide alternatives to Chinese debt traps.

Another obvious solution is to figure out a way forward for regional trade. The Senate’s failure to ratify the Trans-Pacific Partnership undermined both the “free and open Indo-Pacific” and the confidence of American allies regarding its regional commitments to increase investment. Fortunately, the trade space is still open. The Regional Comprehensive Economic Partnership, is an ASEAN-driven alternative that includes China, and continues to plod through negotiations. Meanwhile, the revamped Comprehensive and Progressive Agreement for Trans-Pacific Partnership (CPTPP) went into effect without the U.S.  An open invitation remains for the U.S. to return.  In this case, the bulk of the work has been done. What remains is selling it politically to a skeptical domestic audience. While difficult to negotiate, trade deals increase economic interdependence and grow the pie.

Across the elements of national power, trends emerge. To realize the “free and open Indo-Pacific” the United States should engage in multilateral institutions to grow the pie with our partners, while productively engaging China where possible. This American vision differs most clearly from the dystopian future of techno-authoritarianism offered by the China model. While a robust free trade regime backed up by iron-clad security commitments makes a strong starting point, it is that much more compelling when woven together with the moral power of American ideals and values.

The United States is and will remain a Pacific power. The United States has gestured at its vision for a “free and open Indo-Pacific,” but it has not yet fully defined, resourced, or branded that campaign. To preserve America’s regional leadership, the United States must further develop the “free and open Indo-Pacific” tagline into a comprehensive strategy synchronized across the diplomatic, informational, military, and economic domains. Rather than learning the wrong lessons from containment and embarking on a new Cold War, the United States needs to deepen regional engagement, demonstrate its commitment through presence at key multilateral events, and actively compete in the information environment. Now is not the time for panic, but rather a return to the commitments of the U.S. vision for the post-war world: strong alliances to ensure the peace, freer trade as the engine for economic development, and moral leadership shining a path toward political reform.

Photo: The Karya Terindah Performing Arts group performs a cultural celebration during the Pacific Partnership 2019 opening ceremony, which begin in Malaysia in March 2019