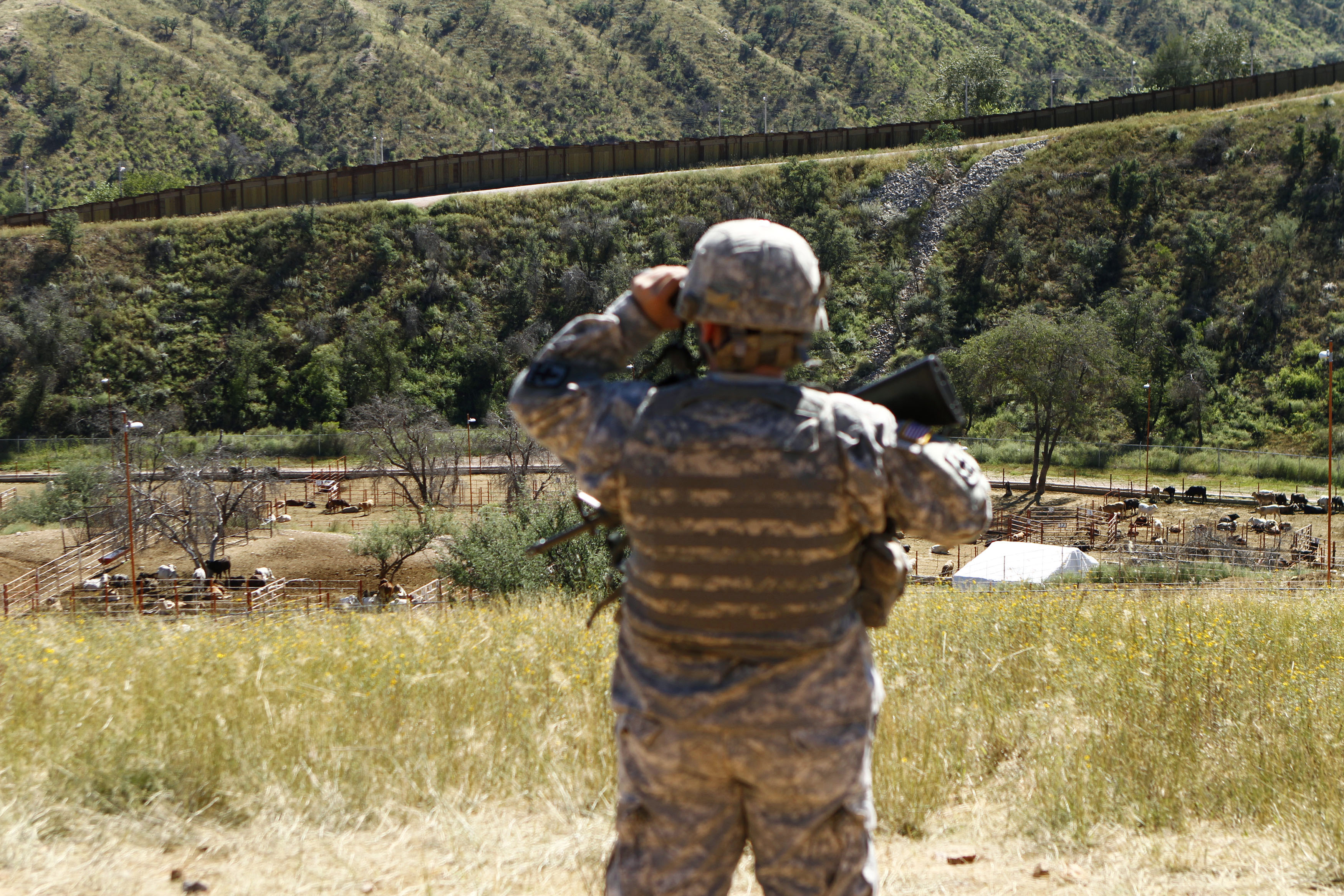 when the “threat” along the border grows … to an intersection between transnational organized crime and transnational terrorism, the clear distinctions we prefer may become clouded.

For this Whiteboard, we polled members of the faculty who specialize in domestic security. They include reserve component officers, a visiting professor from the Department of Homeland Security, and the War College’s Director of Homeland Security. What do they have to say about the matter? Read on!

This Whiteboard is now closed, and we no longer accept responses. Be on the lookout for more Whiteboards (see the bottom of the page for links to other releases in the Whiteboard series).

What roles, if any, should the military have in policing the U.S. border?

The President’s decision to send National Guard troops to the border may appear to be incendiary to some, but it follows a trend. What U.S. Customs and Border Protection (CBP) has designated as Operation Guardian Support follows the Obama Administration’s Operation Phalanx, and the Bush Administration’s Operation Jump Start before it. In each circumstance the Presidents each arrived at a conviction that additional assets were needed to supplement efforts. But, if focusing on the question of policing along the borders, the Guard’s support to date has been deliberately indirect. CBP gratefully acknowledges support in functions like aerial support, sensors, border surveillance, and more. But “[I]mmigration Enforcement remains the exclusive responsibility of civilian law enforcement personnel.”

This deliberate distinction is indicative of an ethos supported by both the military and law enforcement. In its simplest interpretation, we as a society want our soldiers to be soldiers and our policemen to be policemen. While both are sanctioned to use force in the performance of their duties, those duties are markedly different, as is the appropriate use of that force in their execution. In a nutshell, the military – at least the active component – is restricted from actions that are compulsory, prohibitive or coercive against U.S. persons. And while these restrictions do not immediately constrain the National Guard, I know few Guardsmen who are anxious to see their forces engaged in direct law enforcement roles.

All of this is prudent and proper in the American brand of a free society, so long as the threat along the border remains largely a question of enforcement against peoples without a malevolent intent. But when the threat along the border grows from illegal aliens seeking economic opportunities to criminal cartel operations – an intersection between transnational organized crime and transnational terrorism – clear distinctions become clouded. Does law enforcement have the capability and capacity to cover the spectrum of these security concerns? Should we expect it? Could there be a requirement for another tier of augmentation from the military?

There has been much discussion recently on the President’s decision to send National Guard soldiers to support Customs and Border Patrol at our nation’s southern border. Between 500 and 4,000 National Guardsmen could be involved. However, this particular deployment isn’t the lightning rod issue it first appears.

An Abridged Law: The 2018 operation is double-insulated from the Posse Comitatus Act (PCA), that prohibits the use of the Army and Air Force from participating in civilian law enforcement within the homeland (the Navy and Marine Corps are similarly covered under Title 10, US Code and DODI 3025.21). First, PCA does not apply to Homeland Defense missions – the protection of US sovereignty, territory, domestic population, and critical infrastructure against external threats and aggression or other threats, as directed by the President of the US. Military operations conducted as Homeland Defense are not law enforcement activities. Thus, Title 10, US Code, forces are not subject to the restriction of the PCA. Second, the PCA does not apply to National Guard forces operating under Title 32, US Code, or state active duty status.

DoD should provide the depth to the border defense by conducting security cooperation activities with [REGIONAL PARTNERS].

Defending a border requires a defense in depth. A simple obstacle at the demarcation line will usually fail either physically or fiscally. The operational plan for conducting this defense in depth belongs to the U.S. Customs and Border Patrol and its US Government interagency partners. DoD has an important role as an interagency partner and broker in support of the CBP.

In my opinion, DoD should pre-empt the need for a more robust border defense by conducting security cooperation activities with (and within) Mexico, Guatemala, Belize, Honduras, El Salvador, Nicaragua, Costa Rica, Panama and Colombia. These would focus on developing a set of more capable, regionally coordinated border defense forces. To support this mission, four things are needed:

In May 2014, the Secretary of the Department of Homeland Security (DHS) directed development of a Department-wide Intercomponent Campaign Plan for both borders and all ports of entry into the United States. A headquarters planning team initiated coordination of a draft of the Department’s strategic guidance for the U.S. Southern Border and Approaches Campaign Plan. The two primary components of this plan are:

In a similar vein, DHS currently creating a Northern Borders and Approaches Campaign Plan with the assistance of the other federal agencies and departments. The goals of these plans are to conduct multiple operations to secure the borders within the United States to prevent, disrupt and dismantle the flow of illicit drugs, weapons of mass destruction, firearms, human smuggling, illegal migration, transnational criminal organization members and all types of terrorists.

The Department of Defense (DoD) and Services all contribute military members as part of each JTF and work with other federal partners to help with mission planning and operations as we engage with our foreign partners. DoD personnel assigned to these JTFs are trained and clearly understand their respective roles in coordinating any operations. Critical Information Requirements (CIRs) drive national or strategic level Departmental reporting. These CIRs are broadly defined so as to not limit or restrict Component reporting. Recommend adding in the new White House/POTUS direction for DoD/DHS coordination. Ask the students to examine the potential issues and courses of action that DoD may assist with in support of the DHS mission to protect America’s borders.

HAVE SOMETHING TO ADD?

How good is the U.S. Army at developing strategic leaders? Be a part of the follow-on Whiteboard. Send your 300 word (maximum, and we mean it!) response to andrew.a.hill13.civ@mail.mil, cc: thomas.p.galvin.civ@mail.mil by August 3, 2018. Remember to include the Subject: Whiteboard #2.

Photo: A member of the United States National Guard patrols along the U.S. and Mexico border in Nogales, Arizona October 8, 2010. The troops are part of a 1,200 soldier deployment authorized by President Barack Obama to patrol against illegal immigrants and drug smugglers. Arizona will receive 560 troops to protect the border.