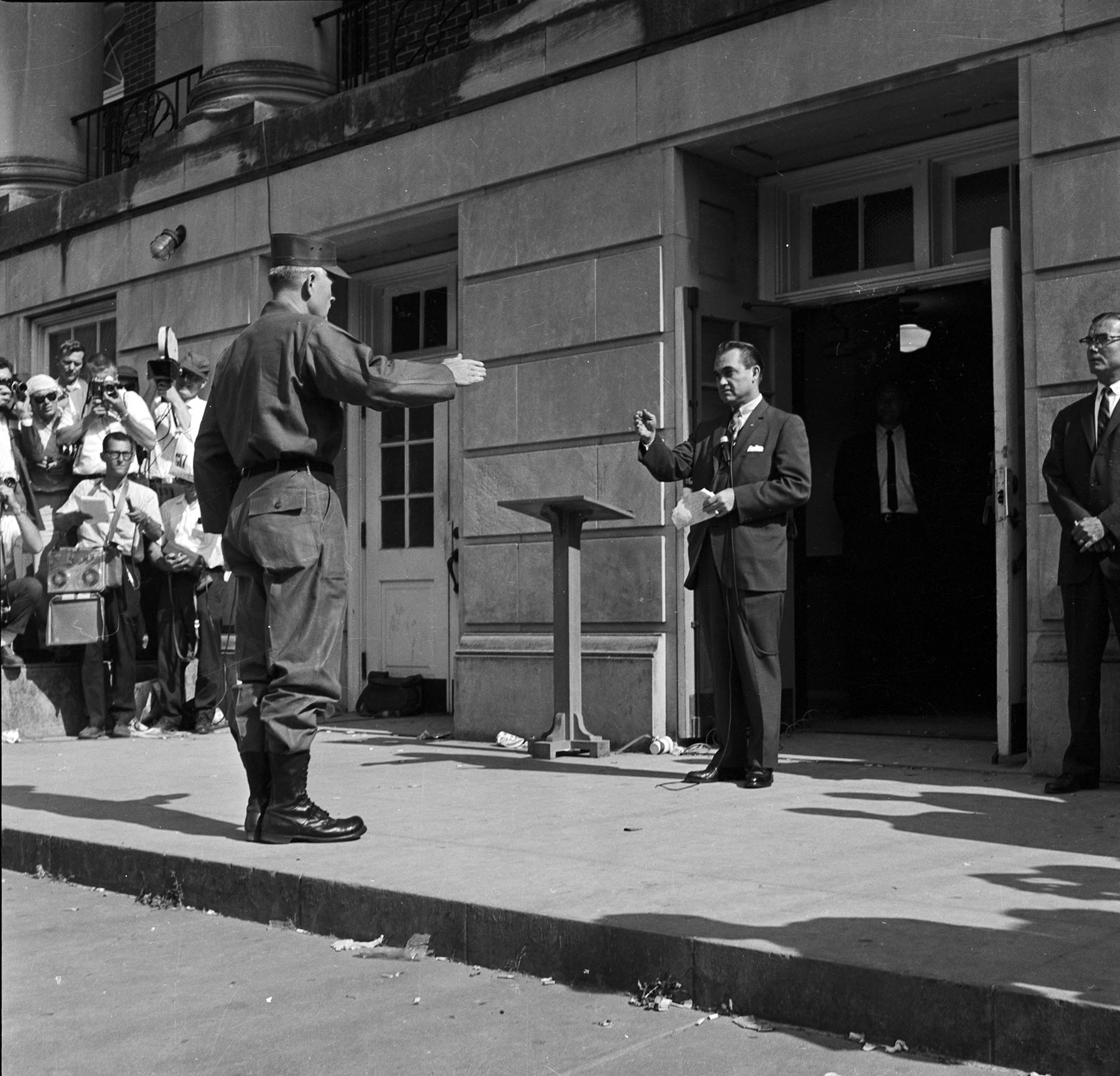 Perhaps the most significant example of the tension between federal obligations and state loyalties in National Guard history occurred fifty-five years ago in Alabama.

On the ABC television series Designated Survivor, a bombing kills nearly every leader in the three branches of the federal government, and the executive branch’s designated survivor, the soon-to-be-replaced HUD Secretary, is sworn in as the US President. Among the many challenges he has to deal with during his first days in office, is an insurgent Governor of Michigan who not only questions the legitimacy of the new President, but declares martial law to oppress Muslim-Americans.

To protect these citizens and reinstate his authority, the President decides to federalize the Michigan National Guard and sends a staffer to Dearborn to monitor the situation. During a tense standoff in which the President’s representative is blocked at the airport by the Governor and state police, the National Guard arrives. The Adjutant General gets on the mobile phone with the President, but refuses the order to federalize out of loyalty to the Governor.

Such strong state loyalties may seem to be an antebellum relic, but this plot twist illustrates the dual-status of the National Guard –distinct in our armed forces – and the potential moral dilemmas that could result from their unique position. The National Guard is a state-based organized militia normally under the command of each Governor until federalized. Guardsmen swear an oath that includes obedience to the orders of two commanders-in-chief: their Governor and the President.

The Stand in the Doorway

The moral dilemma of this fictional situation actually has some historical precedent. Perhaps the most significant example of the tension between federal obligations and state loyalties in National Guard history occurred fifty-five years ago in Alabama. On June 11, 1963 Governor George Wallace personally blocked the doorway of a University of Alabama building, barring two African-American students from completing their registration and defying a court order.

The Stand in the Doorway was Wallace’s symbolic attempt to fulfill his inaugural promise of “segregation forever,” a stance that he tried to justify as a matter of state’s rights. President Kennedy sent Deputy Attorney General Nicholas Katzenbach and federal marshals to Alabama to compel Wallace to allow the students in, but the Governor refused and used the opportunity to give a multi-page speech. As a result, President Kennedy federalized 17,000 members of the Alabama Army and Air Guard and assigned them the mission of clearing the doorway.

Brigadier General Henry Graham, the 47-year old deputy commanding general (DCG) of the 31st (“Dixie”) Division of the Alabama National Guard was given the task of removing the Governor from the doorway. Graham was a real estate man in Birmingham and was a career Guardsman with an interesting military background. He enlisted in 1934 and rose through the ranks to First Sergeant until he was commissioned in 1940. He served on active duty in World War II and for a period during the Korean War. He had also been The Adjutant General (TAG) of Alabama briefly from 1959 to 1961. He was apparently a strong believer in leading by example, earning his Airborne wings as a Colonel at 43 years of age; a few years after the incident at Tuscaloosa, he would earn his helicopter pilot wings as well.

[Graham] could have made a different choice. If he had refused the order to federalize …, he probably would have been lauded as a hero in Alabama and across the south.

There were two Major Generals in the Alabama Guard who could have been selected for the task, but the Army reportedly believed that it was problematic to give either of them the task. The Alabama TAG was a member of the governor’s cabinet and the commanding general of the Dixie Division also served in the Wallace administration in his civilian role. Graham was deemed best for the task because he had a reputation for calm leadership and had prior experience with the civil rights movement. In 1961, he had led a group of Alabama Guardsmen mobilized by Governor Wallace to protect the Freedom Riders. Graham established a cordon of Guard troops that protected the church in Montgomery where they had sought shelter from angry mobs and—at Dr. Martin Luther King’s request—provided escort for their buses to the Mississippi state line.

As is typical for the National Guard during the summer, the 31st Infantry Division was conducting annual training in June 1963, so General Graham was called out of the field and given his new mission. He flew to Tuscaloosa and arrived at a local armory around 1:40 PM on 11 June. There he met with his boss, General Taylor Hardin, Commanding General of the Dixie Division, who apparently agreed to act as an intermediary with the Governor. They negotiated for about 45 minutes before agreeing to a carefully orchestrated plan.

Troops had been practicing moving the Governor as gently as possible, but neither Graham nor Hardin wanted to physically move Wallace. Instead, they agreed that in exchange for a little time for a “brief stunt,” Wallace would step aside when asked. Despite having a several thousand-member taskforce of the Alabama National Guard at his disposal, Graham also decided to lower the force posture significantly, taking a token force to the campus and having only four, unarmed Soldiers accompany him to the doorway.

By 3:30 PM, General Graham walked the final stretch through a phalanx of Alabama State Police in hardhats and stood alone in front of Governor Wallace. Although he was not obligated to do so, Graham saluted Wallace before stating that it was his “sad duty” to ask him to step aside. Wallace launched into his statement, immediately pointing out that he had been Graham’s commander-in-chief before the Alabama Guard was federalized. To his credit, however, Wallace also added that he wanted to avoid a confrontation with the federalized Guardsmen because they were still Alabamians. With a final swipe at what he called a “military dictatorship in this country,” Wallace concluded his brief stunt and the two exchanged salutes once more. According to his son, Wallace would later regret standing in the doorway.

Lessons of Loyalty and Morality

Events had been pushing President Kennedy to advocate for equal rights for African Americans, and he used the peaceful conclusion to the Stand in the Schoolhouse Doorway as an opportunity to address the nation that evening and advocate for a civil rights bill. The day after his address, civil rights leader Medgar Evers was assassinated outside his home in Jackson, Mississippi, and before the month was over the National Guard would be called out in Cambridge, Maryland to quell violent protests over race.

The public record does not share General Graham’s thoughts or concerns about his “sad duty,” but Wallace’s comments could have been taken as a veiled threat. Both men knew that Graham would not remain federalized and would soon become an Alabama Guardsman again. National Guard general officers serve at the discretion of their Governor/Commander-in-Chief, and he could have been putting his military career at risk.

General Graham would not only continue to serve in the National Guard, but he would once again become the Alabama TAG. In March 1965, he would also protect civil rights advocates for a third time by commanding the 2,000 Alabama Guardsmen who protected the Freedom Marchers from Selma to Montgomery after the events of the Bloody Sunday.

Fifty-five years after this event, it is easy to consider the moral choices that Graham had to make and agree that they were righteous. But in that moment, he could have made a different choice. If he had refused the order to federalize or had chosen to make a stunt of his own in front of the cameras like the general on the TV show, he probably would have been lauded as a hero in Alabama and across the south.

Perhaps he considered the choices made by hundreds of other sons of the south a hundred years earlier, who rather than fulfilling their oath to the nation, decided to join the Confederacy and contributed to the bloodiest war in American history. Perhaps it was a simple matter of honoring the oath that he had taken. Although he is little known today, because he made the choices that he did, Graham not only ended up on the right side of history, he serves as an enduring example to Guardsmen of the primacy of duty to the nation.

George Schwartz is a retired brigadier general in the U.S. Army and currently serves on the faculty of Immaculata University. The views expressed in this article are those of the author and do not necessarily reflect those of the U.S. Army War College, U.S. Army, or Department of Defense.

Photo: Brigadier General Graham and Governor Wallace exchange salutes as the former executes his “sad duty” to command the Governor to stand aside from the doorway.

Other Posts in the “Anniversaries” Series: