Adversaries will deliberately create situations for which U.S. military leaders have not been educated, trained, or equipped to overcome.

The United States’ enemies are smart, dedicated, and determined. They will not attack strengths; they will attack weaknesses at times and places of their choosing and seek to do so in ways for which the DOD is unprepared. American enemies will transform their force structure, technology, and processes faster than the United States can transform its own.  They can do this precisely because the United States’ most potent power projection and warfighting capabilities are technologically advanced but hugely expensive, with near half-century service lives.

Advanced technologies give military leaders a warfighting edge while expensive systems grant civilian leaders domestic political advantages. Long service life locks in high maintenance and upgrades expenditures for many years to justify the initial sunk costs as though they were investments. The combination of advantage and sunk cost momentum solidifies a U.S. national security trajectory that lacks agility and resists change. This challenge is due to U.S. military and civilian leaders’ short decision horizons compared to the technology acquisition process timelines and program service life. Critically, the  United States’ security trajectory is transparent, providing its adversaries information and time to adapt with cheaper capabilities. Its adversaries have the opportunity to be more agile and thus are inside the  United States’ strategic OODA loop. Adversaries will deliberately create situations for which U.S. military leaders have not been educated, trained, or equipped to overcome. The enemy has the innovation initiative.

The Department of Defense (DOD) needs military leaders with the mental agility to outmaneuver enemies in the cognitive domain, to have what the Joint Chiefs of Staff call “intellectual overmatch,” and to have the ability to innovate when faced with completely novel situations created by an adversary. The U.S. officer corps must also be able to devise novel concepts in force structure, technology, processes, and procedures for assessing their deterrence and warfighting value. Wargaming does both. History demonstrates the practical ability of wargaming to develop mentally agile officers and assist engaged forces in adapting. The Defense Department must also understand how to use wargaming to explore fundamentally novel situations in the future.

There are three categories of novel situations that DOD leadership will face, depending on the presence or absence of novelty in the scenario and the warfighting techniques being used. For novel situations or concepts, they are by definition not enough previous real-world cases or events from which to draw conclusions. Consider the following fictional example of a novel situation:

“The scenario is a war between Pakistan and India in which China is (highly) concerned. Theater/tactical nuclear weapons have been used. China is deploying major forces to its southwest border and engaging in a massive worldwide cyber and media campaign. Meanwhile the US is attempting information operations to de-escalate the conflict, reduce China’s influence, and regain US influence with the protagonists.”

In this situation, both the scenario (theater nuclear war) and the techniques (information operations) have novel aspects, since the scenario has never occurred, and the techniques have not been used after the employment of nuclear weapons. The fact that the situation also has familiar aspects (such as joint warfare, propaganda, and diplomacy) is no reason for assuming that senior leaders’ intuition will be successful or even not catastrophic. Attempts to wargame future novel situations face three major obstacles:

Since each novel situation will contain familiar aspects, it is tempting to rely on intuition based on similarities between the past and present to inform and guide decision-making – this temptation must be resisted. Research has shown that while “intuition can sometimes be brilliant,” it suffers “two common flaws … random inconsistency and systematic distortion.” Wargaming adds the procedural structure that limits the effects of intuition’s flaws while enhancing its benefits.

Central to wargaming is adjudication, during which the outcomes of the opposing players’ decisions are determined. Frequently this is done by an adjudication cell that relies on some combination of professional subject matter expertise, the outputs of one or more simulations, and combat results tables. Adjudicators must understand the situation enough to decide the outcome of the interactions. This clear understanding of well-understood situations is simply not true when dealing with novel situations.

Many wargames are weeks long with dozens of participants, and they often, except for a small number of branches, represent a single trajectory through the space of all possible decisions and possible outcomes of those decisions. At best, such games might demonstrate how a novel concept could fail, but they do not indicate the likelihood of failure, other failure modes, or the possibility of successfully achieving the objectives. The game does not provide in-depth knowledge into the novel situation, and what insight it does provide comes with no indication of how likely it is that the insight will be useful.

One approach to deal with the constraint is open adjudication where the players participate with the adjudicators in determining the outcomes of interactions. The wargame becomes a structure within which the participants explore the novel scenario as they decide about novel warfighting concepts. The structure forces decision-making within a competitive environment followed by a cooperative exploration of possible outcomes, and this sequence is repeated as the game progresses.

The iterations spawn multiple trajectories and create breadth across the decision and outcome space.

The requirement can be satisfied by many small games run in parallel where each game is repeated multiple times with game design between each iteration modified by insights generated by the previous iteration. The iterations spawn multiple trajectories and create breadth across the decision and outcome space. Both Matrix Game and map/board based Hobby Game techniques can satisfy these requirements. 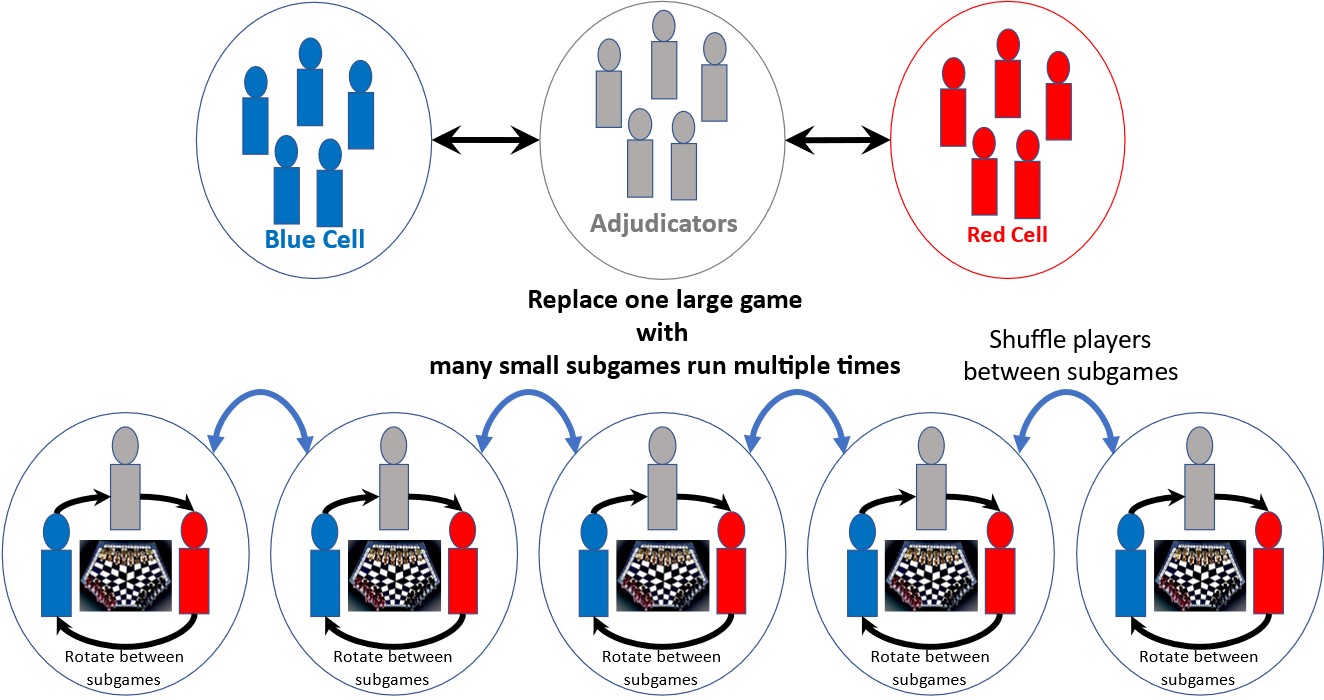 Each small wargame has one player per side and one adjudicator who also acts as a data recorder. Each subgame is played many times with players rotating between sides and the adjudication position. Rotating roles is critical for games that explore novel situations, as it forces players and adjudicators to see the situation from different perspectives and be innovative about adjudication. Repetition forces the players to think harder about how to win as they face players who have seen their previous attempts. Whether players stay in the same groups for all the subgames or are shuffled between subgames is an open question. I call this “Swarm Gaming” (not wargaming swarms, that is a different topic).

Two features facilitate a deeper understanding of the novel situation being gamed:

Not every individual will be an expert in every facet needed to play all parts of the game effectively, and none of them will be an expert in the novel aspects of the situation. Participants gain experience through multiple iterations of the game, by rotating players between sides and adjudication between games, and by scheduling a plenary session at the end of the event to share ideas and reasoning, including moves not taken. Rotating players between roles (Red, Blue, and Adjudication) brings more diversity of thinking and experience to each role and increases player engagement.

An obvious objection to the Swarm Gaming approach is that it removes group discussions during play and is therefore less valuable than a single traditional game between group cells involving pre-decision discussions. The following reasons dismiss this objection:

This leaves the inevitable conclusion that, at best, pre-decisional discussion is not always a necessity, and its presence is, more often than not, a problem.

It is tempting to draw on the Good Judgment Project and the creation of superforecasters as a counter to the research about the failure modes of group discussions. Although valid concerning forecasting, the conclusions are not relevant to most DOD wargaming. The Good Judgment Project approach identifies superforecasters and has developed techniques for training those identified superforecasters. It deals with forecasting rather than decision-making: the individuals in the group engage in a normative process of making their forecasts as individuals and then discussing, and the process takes significantly longer than that available for wargaming. This is quite a different participant selection and activity process than used in DOD wargaming. Wargame participants are unlikely to be trained superforecasters, and there is no time during most games to train them.

The Department of Defense’s reliance on expensive advanced technology power projection and warfighting capabilities with long service life has simultaneously removed its agility while providing our adversaries the opportunity and motive to innovate in ways that will surprise and shock the U.S. in future conflicts. Congress and the defense industry are unlikely to change their symbiotic vote maximizing and rent-seeking behaviors, which are detrimental to national security. Swarm wargaming provides DOD decision-makers deep and broad insights into using its expensive and slow-to-change assets when dealing with the unknown and novel warfighting situations. It does so using open adjudication, rapid iteration of multiple parallel and small subgames, and role rotation. Every player, not just the senior officer, makes numerous game decisions and is personally responsible for the consequences of their decisions, is forced to be mentally agile and innovative. Swarm wargaming produces the JCS’s intellectual overmatch while using a wargame design with characteristics demanded by the JCS.

The DOD cannot rely on Congress and Industry to stop locking it into a highly visible long-term platform acquisition strategy. It must not be content re-playing traditional methods against novel situations that at best explore how surprised people will flail. The DOD must transition to flexible gaming techniques that explicitly develop intellectual agility and innovation in all players. For a similar investment of personnel, time, and resources, swarm wargaming can deliver better results than the traditional large-format wargames over a more flexible period. The DOD has ceded the strategic innovation initiative, but it can take it back with Swarm Wargaming.

Dr. Stephen Downes-Martin is a Research Fellow at the US Naval War College and is an independent scholar researching, teaching and supporting wargaming, game theory, confrontation analysis, systems thinking, decision support and analysis, negotiation analysis, deception and assessments methods applied to problems at the strategic, operational and tactical levels of warfare and business. The views expressed in this article are those of the author and do not necessarily reflect those of the U.S. Army War College, the U.S. Army, or the Department of Defense.

Other releases in the “Wargaming Room” series: