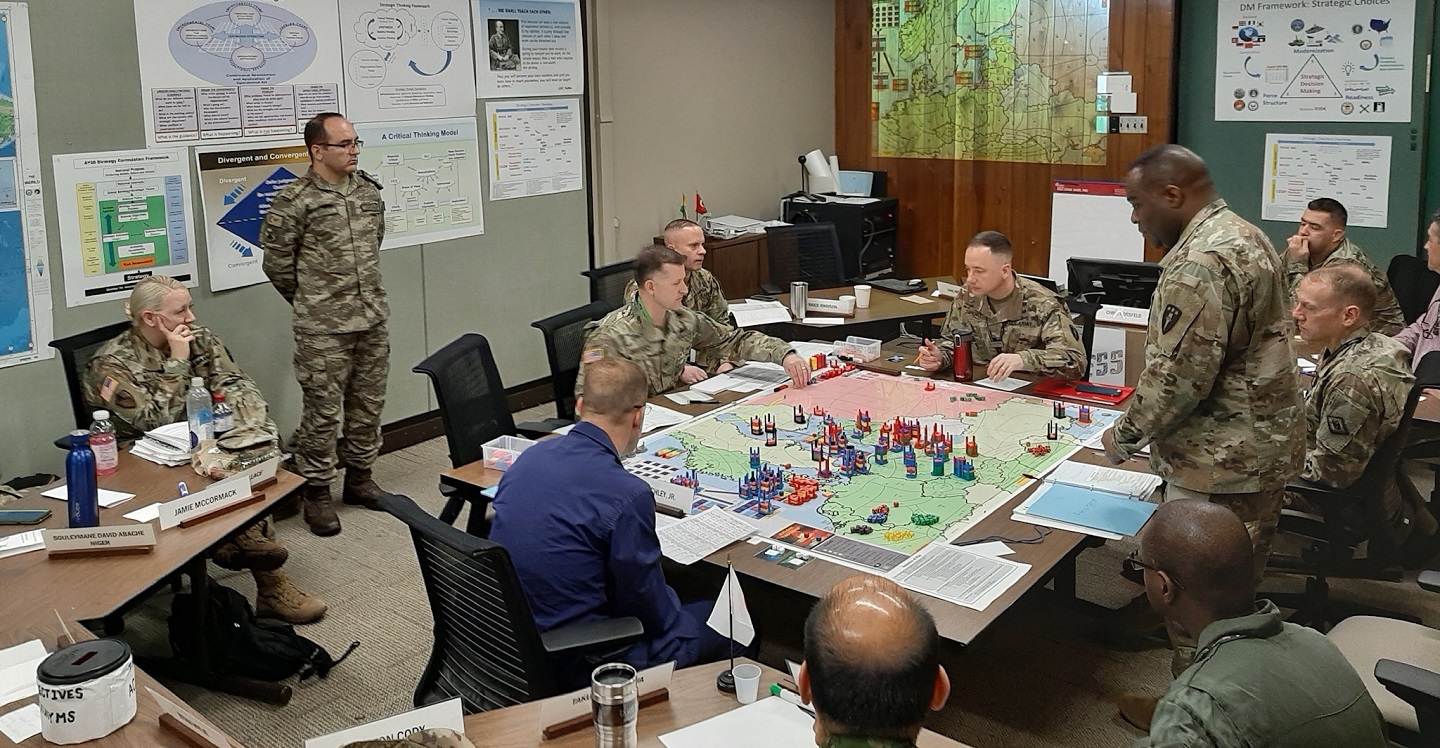 Before we get too far, let’s address some of the baggage that comes with wargaming.

“SHALL WE PLAY A GAME?” These are the iconic words from the 1983 movie WarGames, in which a high school student unknowingly hacks a government computer system to play a game called “Global Thermonuclear War.”  The protagonist sets off a chain of events that blurred the lines between gameplay and reality until the wayward artificially intelligent computer ultimately concluded that no one could win a nuclear war, a thoughtful revelation inspired after playing Tic-Tac-Toe with itself. Fast-forwarding to 2020, the Chairman of the Joint Chief’s (CJCS’s) recent directives clearly indicate that thinking is a critical part of warfighting, especially in the planning and execution of globally integrated campaigns. Luckily, the U.S. Army War College (USAWC) has games for that.

Before we get too far, let’s address some of the baggage that comes with wargaming. Every person that enters the wargaming room brings with them some biases. Student players and faculty must recognize, and explicitly state, their own biases related to wargaming and games in general. Wargames, and games more broadly, are not new instruments, nor are they new to the classroom. Military practitioners may reflect back on the painful steps in the Military Decision Making Process or an equally agonizing multi-day exercises in a simulation center. Others may think of players bent over the board game Risk, Dungeons and Dragons, or Axis and Allies. Ultimately, designers must be mindful of their biases, balance realism with playability, and endeavor to create a simulated environment which blurs the line between game-play and reality. Doing so allows wargames to assume more prominent roles in Joint Professional Military Education (JPME) at the Senior Service College level.

The recently released CJCS’s Instruction for Officer Professional Military Education Policy (OPMEP) and the Joint Chiefs of Staff (JCS) Vision and Guidance for the Professional Military Education & Talent Management clearly direct a renewed emphasis on developing and assessing the critical and creative thinking in joint warfighting throughout professional officers’ career and at all levels of professional military education.   These policy guidelines reinforce the special areas of emphasis, like Great Power Competition and Space as a Warfighting Domain, to be incorporated into JPME curriculum provided by the USAWC.

Through the OPMEP and the JCS Vision, the USAWC has the responsibility to provide JPME II senior service college education that is focused on developing strategically minded warfighters, specifically concentrated on Landpower. Within the USAWC, the Department of Military Strategy, Planning, and Operations (DMSPO) is responsible for ensuring that the unique joint, service, and multinational concepts, capabilities, and planning products are incorporated into the resident education program.  DMSPO primarily accomplishes this through the Military Strategy and Campaigning (MSC) course, which is required for all USAWC students. Faculty from across the college, however, are in a constant dialogue about how to assess the OPMEP-directed. Attributes and skills required of strategically minded joint warfighters, as well as how many repetitions of those assessments, are required to accurately evaluate student performance.

Prior to the 2020 academic year, the MSC course concluded with a student led operational design planning and briefing exercise that assessed how a 15-person seminar synthesized joint, multinational, and service capabilities; joint and Service concepts; and joint functions in a fictional scenario against a regime that was supported by a near peer competitor. Although useful, student effort was inconsistent. Where some students focused on developing PowerPoint slides, others were engaged in deep thinking, while still others were sitting on the sidelines, contributing little to nothing to the process or final products. Additionally, the learning event lacked a formal feedback mechanism to assess student thinking, did not evaluate student judgment, and did not require students to adjust to a competitive and evolving adversary.

Shall We Play a Game?

In order to change those dynamics, DMSPO and the Center for Strategic Leadership (CSL) piloted a new wargame for the academic year 2020. Previously, wargaming was relegated to individual faculty preference, incorporating wargames into the core curriculum where they saw opportunities, but there was no stock, “off the shelf” model designed for all to use. Last year, at the conclusion of the MSC course, four seminars played Joint Overmatch: Euro-Atlantic, a fictional near-peer, all-domain, armed conflict wargame. Students analyzed a future-oriented, Euro-Atlantic scenario set in the spring of 2027 that was intended to reinforce and practice operational design, operational art, campaigning in conflict, and other principles learned throughout the course. This experiential learning event provided these future national security leaders opportunities to make decisions, and, perhaps most importantly, deal with the consequences of those decisions while applying military power to accomplish national security objectives.

The application of military power is the central focus of the game, but political, economic, and informational instruments of national power can impact perceived political victory reflected in the payoffs of military outcomes.

Students square off in Joint Overmatch as two competing combatant command level Combined Joint Task Forces (CJTF) with subordinated component commands. One side is blue, replicating a NATO-type alliance, while the other is red, to indicate a multi-national Russian led coalition. Other students might operate within the teams as selected CJTF staff at the direction of their Faculty Instructor. The two competing teams receive specific and unique national level direction to develop and fight a campaign in armed conflict.

The CJTFs have the ability to employ theater level all-domain assets and can request effects and capabilities from the equivalent of national-level agencies, Services, and combatant commands. The application of military power is the central focus of the game, but political, economic, and informational instruments of national power can impact perceived political victory reflected in the payoffs of military outcomes. Faculty adjudicate and role play the non-military elements as necessary based on team briefings and requests for assistance and information. Air, land, and maritime, as well as space and cyber forces, are loosely modeled on the current and projected military capabilities of the relevant participants.

The game does not use specific units or combat platforms.  Instead, students engage using broad representations, not replication, of joint capabilities and capacity.  Although the game plays across multiple nations, it does not differentiate between their capabilities. Additionally, the game simplifies many of the complexities of near-peer conflict in order to focus on critical and creative thinking about the application of all domain warfighting.  Faculty leverage unique diplomatic, informational, and economic impact matrices linked to national guidance for each team, replicating civilian leadership oversight and queries about military actions and the campaign. The scenario significantly alters or generalizes real-world facts and invalidates some strategic assumptions in order to avoid classification issues.

In piloting the game in the spring of 2020, faculty observed that the students were engaged and active throughout the experience.  Each played a key role as a component commander, in assessing the campaign, or in consolidating and communicating the plans and capabilities being used to meet their teams’ objectives. Students routinely had to think how actions in one domain advanced or degraded other components or domains based on dynamic changes to an adversaries’ actions. Students struggled with horizontal and vertical escalation issues based on anticipated actions or reactions of a nuclear capable adversary. Most importantly, they dialogued and debated over the outcomes of efficient or ineffective actions as they sought to win the game.

The faculty observations of students showed promise for future iterations of the game, but there are still some challenges. Dice represent friction and chance within the game and pre-occupy some students, often resulting in frustration. Students get distracted by the tactical level interactions, wanting to dig down into the specifics of how a unit or platform might operate. Diligent faculty coaching brings students back to the operational and strategic level. Service, experience, or other biases, from student and faculty alike can enhance or detract from implementation and prevent the best learning by the seminar. Faculty involvement throughout the game is critical to achieving student learning outcomes.

The USAWC is on the right track. The game will be used as the baseline experiential learning event for the MSC course in the academic year 2021.   DMSPO and CSL will continue exploring digital tools to facilitate distributed play and options for automated adjudication. Flexible rules and game mechanics are under development to allow for testing of new concepts and future technologies. CSL has an emerging relationship with a University Affiliated Research Center to explore the possibilities of using Joint Overmatch: Euro-Atlantic as an analytical tool for Combatant Commanders or other Department of Defense organizations.

Joint Overmatch: Euro-Atlantic provides future strategic leaders the opportunity to actively engage military problems at both the operational and strategic level. It provides an enhanced opportunity for students to develop teamwork, organizational skills, and to tap into critical and creative thinking frameworks introduced across multiple courses. Through wargaming, students practice the application of military power in conjunction with other core course concepts – exactly what the CJCS and the OPMEP require from JPME. As tensions peak near the end of WarGames the main character types, “Is this a game or is this real?” Joint Overmatch: Euro-Atlantic successfully blurs the lines between reality and gameplay just enough that students and faculty will respond in much the same way as the computer: “What’s the difference?” And this is probably the strongest endorsement for wargames within JPME.

Photo Description: A resident seminar in the AY20 Class at the U.S. Army War College works its way through a round of Joint Overmatch: Euro-Atlantic applying lessons learned throughout the year.

Other releases in the “Wargaming Room” series: