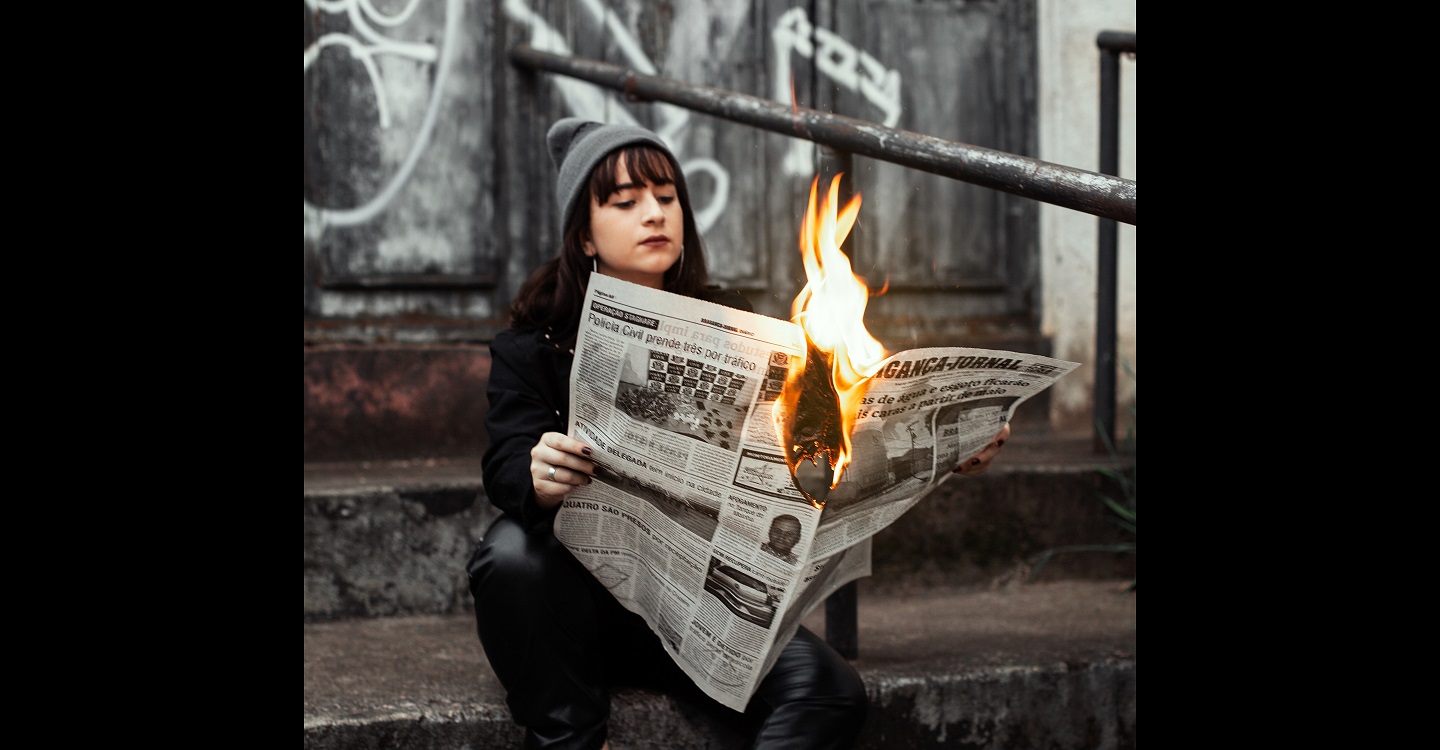 It is twice as hard to crush a half-truth as a whole lie.

The Fourth Estate is in a state of turmoil today, and traditional media is stagnating. Part of this state of affairs is the result of changing perceptions. The news media continues to be viewed as the most mistrusted institution in the world. But now, the problem facing the media has gone to another level. There is a broad lack of trust in media as a profession.

To take that one step further, there is considerable debate whether journalism even is a profession. The common frameworks of professions and professionalism legitimize this question. In his essay The System of Professions, Dr. Andrew Abbott discussed the evolution of a number of professions such as medicine and law. He termed journalism a ‘permeable profession,’ characterized by frequent movement between journalism and public relations with considerable influence exercised by each side on the other. Meanwhile, journalism is neither regulated nor credentialed. There are no annual training or continuing education requirements and no body of accepted practice similar to those of the legal bar or medical associations. There is no single code of ethics, and ethical standards are unenforceable. Abbott noted that there is also no exclusion of those who lack journalism education, training, or adherence to a code of ethics.

While journalism may be composed of people who report, edit, and write the news and do so with a sense of morality beyond that which required by law or even society, this alone is not sufficient to meet the standards of a profession. Instead, what we loosely refer to as the media includes a wide spectrum of individuals with varying capabilities, audiences, standards, and agendas. Has the quality of journalism suffered from this lack of professionalism, infused as it may be with public relations agendas, talking points and ideas? Have these same features also limited the development of journalism as a vocation, perhaps reducing its appeal as a career choice?

The democratization of media by the internet has further blurred the lines between objective reporting and influence. One could have made a stronger case for media professionalism back in the early days of print and broadcast media when the numbers of outlets were limited and the perceptions of quality were far higher. Advertisers helped fuel these perceptions by providing dollars only to sources they viewed as particularly trustworthy or ‘professional.’ But the internet has changed this relationship. Society’s expectations of the media include “information quality, educating people on important issues, and helping inform good life decisions.” Yet, the American public has come to include social media in the category of “media.” With social media being particularly vulnerable to fake news and disinformation, this association is a problem. Advertisers are pulling dollars away from traditional print and broadcast outlets to seek greater returns online. In response, traditional media outlets are trying to stay relevant.

Maintaining relevance has been a losing battle. The news media today is vastly different from it was even two years ago. Newspapers have been declining in readership in the past 20 years, with weekday circulation dropping from 60 million in 1994, to just 35 million by 2018. While local papers have had the most layoffs and greatest drops in circulation, the increase in digital news access has affected urban papers as well. Advertising is also in sharp decline. In September 2019 the Washington Post abruptly ceased distribution of its free Express paper. The paper had an estimated readership of 240,000. Twenty staff members were laid off. As the 2020s approach, one can envision a future without newspapers. Will local news sites fill the void?

By comparison, local television news is stagnant and, at least at the local and regional level, adhering to format and substance unchanged for decades. There is no discernible difference between local television news programs in 1989 and 2019—a half hour block with five or six stories, top story leads, with the last five minutes covering sports and weather. Substantive changes have been driven by cost. It is cheaper to rely on interviews than to actually cover events. And a recent Pew study showed that news stories were growing shorter while sports and weather began to expand. What little substance there is can be further diluted by mandatory banter among the anchors. This isn’t news. It’s old-fashioned entertainment, where the anchors appear trustworthy and believable—and it’s losing out to internet news.

As consumers of news and information we need a mechanism by which to judge: Is there slant, agenda, politics?

We are witnessing a collision between two conflicting sources of information. On the one hand are the commercial sources that depend on the standard filter of traditional media and journalists. On the other hand, are internet sources, which operate on a tenuous presumption that the online environment that the internet has flattened the world to the point that we can directly access ground truth and reality. Certainly, the internet writ large has gifted us numerous conspiracy theories and ideas based on a false premise or faulty science. Think the movement to prevent childhood inoculations for diseases like measles, or the fear generated in numerous communities by fraudulent science narratives that tied inoculations to autism.

As consumers of news and information we need a mechanism by which to judge: Is there slant, agenda, politics? Is an outlet decidedly right wing or left? Are we getting ground truth? People tend to see out information that confirms what they already hold to be true, and algorithms that analyze our choices shape what we see based on whether we may “like” something or not, filling news feeds with story after story particularly designed to appeal to individual users. Psychologists call this ‘confirmation bias,’ the tendency to seek out information that confirms or support beliefs already held.

Somewhere in between these news sources is an emerging model, creating space for itself, where crowdsourced and crowdfunded outlets may have the beginnings of a workable formula for building an audience and securing financial support. The approachability and the format itself, which can appear as decidedly anti-establishment journalism to some, is apparently appealing to many.

The rise of new journalism models like TYT is leading the shift. Even Facebook, which long resisted hiring reporters and paying publishers, announced a new Facebook News tab in October 2019. In an interview Mark Zuckerburg said, “We get that the internet has been very disruptive to the news industry…. This is an important moment in our relationship with the news industry and with journalism. We need to ‘do a better job of supporting journalism,’” he added. The news page launched in New York and plans are for it to become more widely available over the next year. The homepage will be managed by journalists, separate from editorial intervention by the company.

The media’s twin crises of relevance and professionalism requires both introspection and action. The first step is to come to grips with what purpose the profession serves—traditionally its role has been to inform, to educate, and to entertain. And because the profession serves society as a whole, access to media (access to the professional service) is a paramount concern. If indeed there is an audience that relies on traditional media because it is trusted more than social media, it becomes a professional matter to assure the access. It may be a bridge too far to regulate this unwieldy, widely varied field that we call journalism or news reporting. Perhaps it would be more logical to define or divide by type and focus. Certainly we don’t expect the same level of professionalism from gossip columnists or sports reporters as we do from defense reporters who cover the Pentagon, State Department or the White House.

Generally, there is more that media writ large can do from within to build trust and gain back its once-believing audience. The biggest effort journalism can undertake in serious news coverage is to show transparency. Who was interviewed for a particular story? What are other sources? Truth can no longer be taken at face value. Proof must be offered and willingly. Broadcast journalists in particular should disdain celebrity stories as news, resist cynicism and attitude in reporting, and stop repeating unfounded and salacious claims. Self-discipline in a profession notorious for its lack thereof can go a long way to rebuilding trust.

Journalists and editors alike can do a number of things to improve public trust in their work. They can easily increase transparency about their process for reporting and researching news. When serving as the subject of an interview, senior leaders should know they have a right to information about the structure of a story so that they can understand the reporter’s focus, agenda, and how the reporter, as someone outside government, is attempting to make sense of what is happening within. For example, a recent Washington Post Fact Checker story on false and misleading video ended with the comment, “Our work on this project was funded by a grant from Google News Initiative/YouTube. Readers can find the full description of the categories with additional examples at wapo.st/manipulatedvideo.”

Media literacy is paramount. While many schools in the U.S have developed programs to teach media literacy, there is no national data on how the programs are working. Aside from these programs, many adults have no idea where to begin to achieve this literacy. Senior leaders in particular need a sophisticated understanding of media processes and products. They need to be able to define what constitutes ‘fake’ news, know how to recognize ‘sponsored’ content, and understand how social media platforms attempt to influence subscribers and the public at large.

At all levels, soldiers need to understand how the Information Apocalypse, driven by political and cultural agendas, accelerated by the internet’s global voices has changed and continues to change communication standards. Leaders must be determined to resist how the media time and space constraints tend to ‘dumb down’ complex issues and multifaceted topics. Let’s fight for context and detail, insist on transparency and continue to seek out engagement with media and with audiences of all kinds. Our values set as leaders in the Profession of Arms demands it.