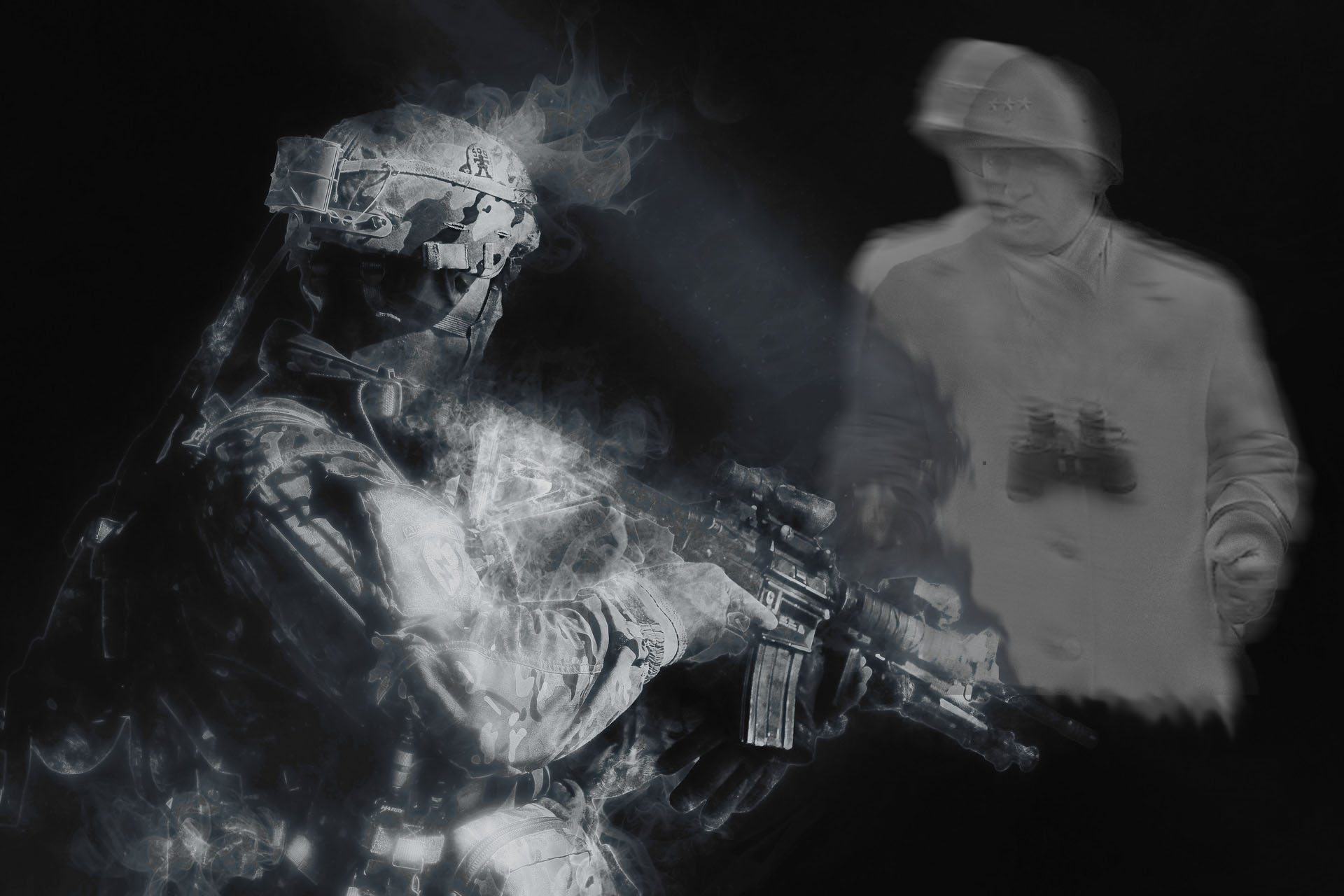 she laid her hand upon this nation, this corpse, and it rose and followed her.

Thanks to all who participated in our Halloween Whiteboard! We received so many great entries that we will run two releases, with second coming tomorrow, fittingly, on the Day of the Dead. In this case, the sequel will be just as good as the first.

Given the opportunity to lead your horrifying hordes with any military leader in history, whom would you bring back from the dead, and why?

Below were our choices for the best, most frightening, or most macabre responses (in no particular order).

The work wrought by Joan of Arc may fairly be regarded as ranking any recorded in history, when one considers the conditions under which it was undertaken, the obstacles in the way, and the means at her disposal. Caesar carried conquests far, but he did it with the trained and confident veterans of Rome, and was a trained soldier himself; and Napoleon swept away the disciplined armies of Europe, but he also was a trained soldier, and he began his work with patriot battalions inflamed and inspired by the miracle-working new breath of Liberty breathed upon them by the Revolution – eager young apprentices to the splendid trade of war, not old and broken men-at-arms, despairing survivors of an age-long accumulation of monotonous defeats;

But Joan of Arc, a mere child in years, ignorant, unlettered, a poor village girl unknown and without influence, found a great nation lying in chains, helpless and hopeless under an alien domination, its treasury bankrupt, its soldiers disheartened and dispersed, all spirit torpid, all courage dead in the hearts of the people through long years of foreign and domestic outrage and oppression, their King cowed, resigned to its fate, and preparing to fly the country; and she laid her hand upon this nation, this corpse, and it rose and followed her. She led it from victory to victory, she turned back the tide of the Hundred Years’ War, she fatally crippled the English power, and died with the earned title of DELIVERER OF FRANCE, which she bears to this day.

From Mark Twain’s Personal Recollections of Joan of Arc

The question specifies “horrifying hordes,” but lacks specificity, so planning assumptions are necessary. Assuming fast zombies (e.g., 28 Days Later) for this horde, Genghis Khan is the ultimate undead leader. In this scenario, Genghis’ ability is unmatched, for six reasons:

I would like to bring Field Marshal Otto Moritz Walther Model back from the dead. I believe it is dangerous to admire your enemies, but acceptable to respect their achievements. Model started his career in the German army in 1909, and during World War, I held various field and staff positions. Model was a member and staunch supporter of the Nazi party. He commanded the IV Corps in the German invasion of Poland in 1939.

Model is known as Hitler’s Feuerwehrmann (“fireman”) due to his ability to stop Soviet offensives. The scope of this command, I believe, is unsurpassed by all commanders in World War II by commanding two Army Groups on the Eastern front simultaneously. In 1944, Model commanded Army Group North Ukraine, and Army Group Central. This forward edge of battle spanned approximately 1200 kilometers and was situated from Latvia in the north, to Pripyet swamps in Galacia in the south.

When transferred to the West to command Army Group B, Model commanded the forces that opposed the Allied troops at Normandy. Later he disagreed with Hitler on the Winter of 1944 counteroffensive (The Battle of the Bulge). Model attacked through the Ardennes and made swift gains initially, but was forced to abandon the offensive in January 1945.  When surrounded in the Ruhr pocket, Model dissolved his unit.

Model burned most of his papers in the Ruhr pocket before committing suicide on 21 April 1945. Also, per historian Robert Forczyk, “Walter Model did not survive the war to write his memoirs, thus his legacy was written by those of this peers and subordinates who did survive.” My purpose in resurrecting this general would be to gather unknown information about his tactics and strategies that are lost to time.

Given his strong belief in reincarnation, it is entirely possible that Patton has already returned from the dead

General George S. Patton, of course! He has more experience leading horrifying hordes than any other dead American general, and he commanded some special, spectral forces as well.

In 1944, the Ghost Army Group defeated a German army in France without firing a shot. The phantoms of the First U.S. Army Group (FUSAG), which he “commanded,” achieved one of the most brilliant military deceptions in history. Later that year, while commanding Third Army, he also oversaw the operations of a Ghost Corps. During the great pursuit across France, XXth Corps earned that moniker because of its reputation for ghosting the Nazis with surprise attacks. It is also rumored that the Ghost Tank of comic book fame, the M3 Stuart light tank commanded by a descendent of General Jeb Stuart and haunted by the same, was assigned to Patton’s Third Army.

Patton’s influences include the original Grey Ghost himself, Confederate Army Colonel John Mosby.  During visits to the family home, Mosby related his famous battles to the youngster. But Patton already believed he had lived previously as a warrior and also took pride in mystical ties to his family’s martial forefathers. Lying wounded on a battlefield in France during World War I, he reported being visited by a Civil War ancestor. Years later, when he died of the injuries he suffered in a vehicular accident immediately after World War II, his spirit visited his daughters.

Given his strong belief in reincarnation, it is entirely possible that Patton has already returned from the dead. Right now he (or she) could be a phantom haunting cyberspace, waiting for the right moment to unleash a horrifying army of trolls and undead bots. Perhaps he will finally be able to settle his score with the Russians…

I’d like to meet Stonewall Jackson, famed Confederate general who served in Robert E. Lee’s Army of Northern Virginia during the American Civil War. It’s not that I find Jackson a necessarily compelling military figure, though his Shenandoah Valley campaign during the spring of 1862 certainly makes for gripping reading. Nor am I all that interested in what Jackson might have to say about our current debates over Confederate monuments or the rise of white nationalists in far too many of our communities today. His legendary fondness for lemons doesn’t even fascinate me enough to recall him from the dead.

Rather, I’m interested in one small, but arguably important, detail – if I met the ghost or resurrected body of Stonewall Jackson, would he have one arm or two?

Recall that Lee’s trusted subordinate was wounded at the April 1863 battle of Chancellorsville, a wound so grievous that the amputation of Jackson’s left arm wasn’t enough to save his life. In fact, a shaken Lee, after hearing of the surgery, wrote that Jackson “has lost his left arm but I my right.”

Lee’s commentary suggests something about how we remember famous wartime generals like the vaunted “Stonewall.” The commemorative renderings of Jackson, whether carved in granite on Stone Mountain or sculpted in bronze in Charlottesville, present a two-armed martial hero, confidently astride his trusty mount Little Sorrel. It somehow seems better to depict the whole Confederate champion, not the bed-ridden one who had lost an arm in a mistaken case of fratricide.

But what if Jackson returned to the living with only his right arm intact? Would it give us pause, encourage us to consider why we remember dead generals in ways that, too often, present them in their best possible light? Would a one-armed Jackson zombie actually be more “human”?

Horror literature and movies show that anything raised from the dead should be smart, deadly, and a proven leader of horrifying hordes. William Sherman would bring all three traits as an undead army commander.

Sherman’s graduation as sixth in his class at West Point demonstrated that he was intelligent but not obsessed with perfection. His perception at the beginning of the Civil War that the conflict tested the U.S. Constitution, and that victory required far more soldiers than the government realized, showed his grasp of grand strategy. His understanding of the nature of the Civil War led him to conceive the war’s boldest maneuver – uncoupling from logistic trains and communications to destroy Confederate will to resist and war-making resources. Sherman’s deadliness is legendary because he pursued enemies with single-minded focus on their destruction. His combat pragmatism is clear from his observation; “War is cruelty, . . . the crueler it is, the sooner it will be over,” and his famous opinion on war, “it is all hell.” Who better to lead a hellish army than a general who already understands hell itself?

Sherman crafted his operations as strategic messaging on the power of the Union forces. He avoided unnecessary casualties on both sides, an admirable trait rare in generals of bygone eras. By embracing Lincoln’s concepts for national reconciliation, Sherman showed his skill with the vital war phase of securing the peace. His understanding of the nature of war and applying the elements of national power to gain victory showed his mastery of strategic concepts. Sherman would understand how to command an army today and fight in all five domains of conflict.

Sherman was an irascible killer by nature. Raised from his eternal sleep, he would certainly reach new levels of anger and scare the daylights out of any opponent.