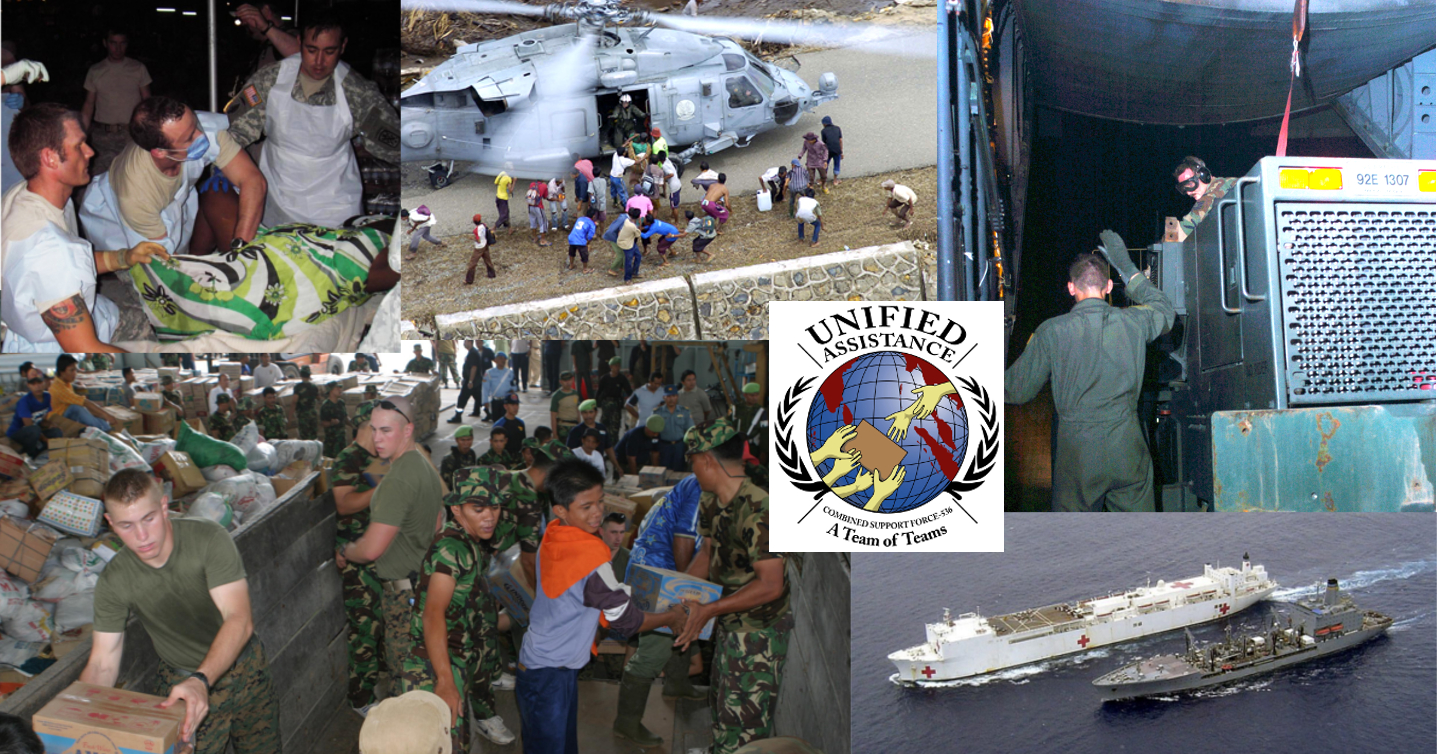 For this whiteboard we reached out to several scholars and asked the following:

US foreign policy since 11 September 2001 has been criticized for an array of prominent failures.  What would you say are the most unheralded successes the United States has had since September 11?

On 26 December 2004, a massive underground earthquake occurred just off the west coast of Sumatra, Indonesia. The earthquake triggered a tsunami that wrought untold devastation across at least eight countries, killing an estimated 220,000 people overall, and displacing almost two million. The situation remained critical for months, as the tsunami destroyed transportation networks, fishing fleets, and the social and physical infrastructure needed to sustain life.

The United States military quickly jumped into action. Operation Unified Assistance began on December 28 with the deployment of US Air Force cargo aircraft to Thailand. These aircraft carried disaster relief supplies, and could conduct maritime patrol to survey the devastation and search for survivors.  The US Navy quickly joined the operation, deploying the aircraft carrier USS Abraham Lincoln, the hospital ship USNS Mercy, the amphibious warships Duluth, Rushmore, Essex, and Bonhomme Richard, and a host of other craft.

The precise impact of Operation Unified Assistance is difficult to calculate, but it likely saved hundreds-to-thousands of lives and enabled the devastated areas to get a jump-start on reconstruction.  In political terms, the operation helped improve public perceptions of the United States across Southeast Asia, at a moment when approval of the United States had reached a nadir.  The operation helped change how the Navy thought about how it contributed to maritime security, with far ranging effects on doctrine, training, and procurement. Humanitarian Assistance/Disaster Relief (HA/DR) became a core competency.  More broadly, successful relief efforts undoubtedly played a role in changing how navies around the world approached their own force structure. The amphibious assault ship, long regarded as a second-class aircraft carrier, became a vehicle for delivering HA/DR, and consequently political influence.

The United States applied the lessons of Operation Unified Assistance to other disasters, including the earthquakes which afflicted Haiti in 2010 and Japan in 2011.  Learning from the US example, China, Japan, and South Korea stepped up their own efforts to develop capabilities for delivering relief.  While it is impossible to prepare completely for an unforeseen disaster, the Unified Assistance has helped set the template for how militaries manage humanitarian relief.

The U.S. Department of State’s indirect strategy of stabilization to reconstitute a government in Somalia was an unheralded US success after September 11. Training under the State Department’s Africa Contingency Operations Training & Assistance (ACOTA) program by contractors, such as Bancroft Global Development Corporation and Pacific Architects and Engineering, was important in raising the combat proficiency level of the African Union Mission in Somalia (AMISOM) forces to a point where they could drive Al Shabaab out of Mogadishu. Leadership was important, especially by a new AMISOM force commander and new Ugandan People’s Defence Force contingent commander, who led AMISOM and Somali forces in the liberation of Mogadishu. The U.S. Department of Defense, including AFRICOM, arranged for intelligence sharing and joint exercises and training with AMISOM forces, which proved useful. Since 2012, The Somalia state building and peacebuilding processes have slowly developed, going through several painful phases. Concerted, sustained engagement by the US and international partners along with Somali efforts from the bottom-up have created the conditions for political and economic revival. However, the Somali government still suffers from corruption and lacks capacity, Al Shabaab remains a force in the countryside and in terrorist attacks in urban areas, and the Somalia effort could ultimately fail. Nevertheless, a decade ago, most experts were predicting that AMISOM would never roll back Al Shabaab and that Somalia would never create a government. In sum, for a low cost, the US and its partners were able to surprise the experts.

A cursory look at assessments of U.S. foreign policy since 11 September 2001 reveals either acute criticism and descriptions of outright failure or laudatory commentary of sweeping successes. These assessments mostly reflect the lens through which success or failure is viewed—and the lens is very often distorted by myopic priorities and political bias. Even the task of identifying success or failure is problematic in two ways. First, lasting and meaningful foreign policy successes usually manifest over the long term – longer than one, two, or even five US presidencies. Second, successful foreign policy often goes unnoticed, precisely because it prevents issues from appearing on any crisis radar. Effective foreign policy occurs without fanfare and remains unknown or invisible. So perhaps searching for a single, historic foreign policy success in this short time frame is a fool’s errand. Instead, we must look to the unheralded successes of the day-to-day conduct of foreign policy.

In the Western Hemisphere, some observers have identified recent major headline events as foreign policy successes. Examples include the apparent retreat of Latin America’s “pink tide” or leftist, anti-U.S. governments and the much lauded peace process between the Colombian government and Fuerzas Armadas Revolucionarias de Colombia or Revolutionary Armed Forces of Colombia (FARC) in 2016. Yet it is premature to characterize Colombia’s peace process as a complete success. Reports of the Colombian government’s failure to deliver on its promises, FARC recidivism, and the ease for FARC and other illegal armed groups to hide, reconstitute and receive support across the border in Venezuela leave a peace that is fragile and reversible.

Whether Colombia achieves a consolidated peace or not, however, does not define the success of U.S. foreign policy towards Colombia (and its implementation through billions of dollars in aid). U.S. foreign policy, in the form of decades of relative consistency and constancy, interagency alignment of diplomatic, informational, military, and economic resources, and support of Colombia’s efforts were key to setting the conditions that enabled the eventual peace agreement. The peace agreement required decades of work enabling Colombia to secure citizens and territory, support development, and finally bring the FARC to the negotiating table. While the peace is fragile, these are clear signs of long-term U.S. foreign policy successes in Colombia. Ultimately, though, Colombians and Colombian resources were and will be the center of gravity for the success or failure of Colombia’s peace.

The President’s Emergency Plan for AIDS Relief (PEPFAR) is a major unsung foreign policy success of the last two decades. Since 2003, PEPFAR has saved over 17 million lives; stopped mother-to-child transmission in 2.4 million babies ; and helped more than 85 million people get tested. In 2018, PEPFAR provided lifesaving anti-retroviral drugs to 14 million people , or roughly 2/3rds of all those with HIV who were being treated. The numbers are impressive, and the effects even more so. The campaign against AIDS, which has been compared to the fights to eradicate smallpox and polio in its importance , has been a significant success. The availability of treatment encourages people to be tested, knowing that a positive result is not a death sentence.

Treatment protects not only the lives of those who are already HIV positive, but also reduces the possibility of transmission to sexual partners and others who may be exposed to bodily fluids. The availability of treatment, combined with other forms of prevention has had a dramatic impact on prevalence. In countries like Burundi, both new infections and deaths due to HIV have fallen to a quarter of what they were at their peak. As a result, policy makers can now envision a future where HIV/AIDS is no longer a destabilizing force and perhaps even a future without HIV/AIDS at all.

The program’s success is due in part to its clear goal (reduce the incidence and death toll of HIV) and built-in operational flexibility that has allowed it to evolve. The effectiveness of PEPFAR is also a testament to the  many international partners who implemented the program across 53 countries, in a variety of different contexts. The program worked with the strength of the United States government (resources, data gathering) and coupled that with the strength of its local partners (the ability to understand and effectively operate in their contexts) to save lives.

Americans are an impatient people who thrive on clarity and unambiguous success. While this energy, enthusiasm and optimism has some clear benefits, in the world of international security, it can be debilitating because not losing or attaining the lesser evil is often the best that can hoped for, and every action has cascading second and third order effects. Nowhere is that clearer than in America’s long conflict with salafi jihadism. While the public is frustrated that organizations like al Qaida, ISIS and the Afghan Taliban have not been vanquished, in reality the United States has made significant progress in the conflict.

Take for instance the transnational anti-terrorism network that the United States helped create. While there are still serious obstacles to effective cooperation among nations, law enforcement, intelligence services, and militaries certainly work better together than they did before.

There also has been progress in the psychological realm—in changing perceptions and expectations. For Americans September 11 shattered the notion that armed conflict is something that only happens far away and was strictly the responsibility of security professionals. Now they understand that security is seamless, that what happens in distant places that they little understand can affect their lives in a direct and dramatic way. And they understand that security is holistic, the responsibility of every citizen.

Outside the United States salafi jihadism’s ideological offensive has been blunted. Although far from defeated within the Islamic world it is largely seen as a spent force rather than one on the ascent. It will be able to kill and maim for a very long time, but few people believe that the vision of Osama bin Laden and his ilk for an Islamic world—or entire world—ruled by a fierce and benighted form of Salafism is imminent.  None of these changes represent unmitigated successes much less “victory” but they do signal progress. Much remains to be done toward the ultimate eradication or at least marginalization of terrorism-based salafi jihadism, but much has been done. Today is analogous to the day after Gettysburg or Midway. As Winston Churchill said following the British victory at El Alamein, “…this is not the end. It is not even the beginning of the end. But it is, perhaps, the end of the beginning.”

Photo Credit: All images of humanitarian operations are from the U.S. DoD, public domain. Composed by Buck Haberichter.