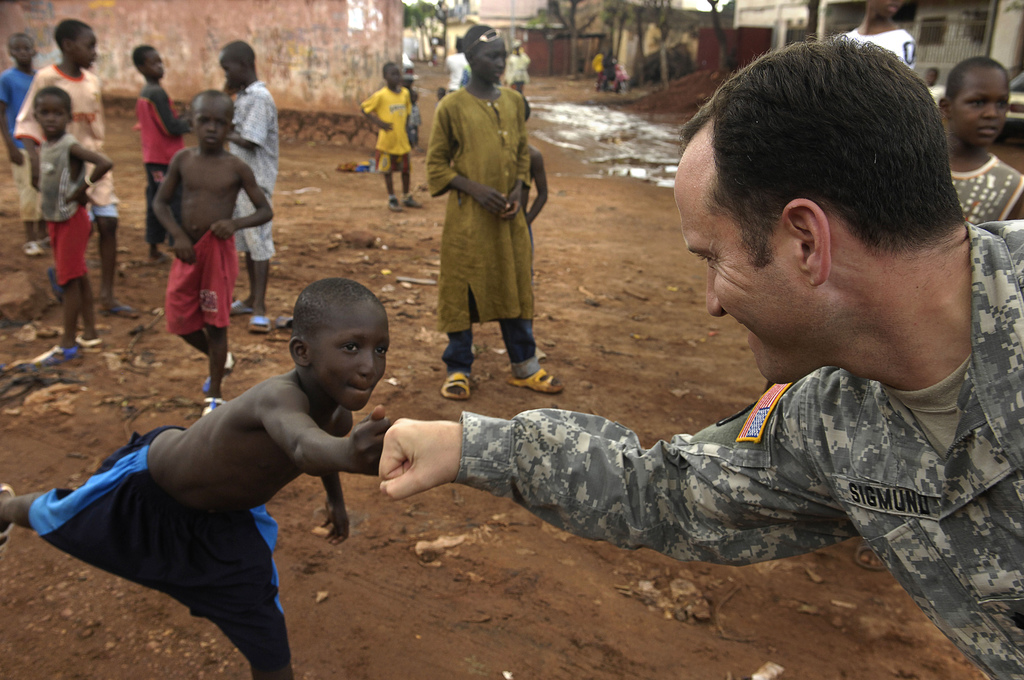 To its critics, the 3Ds [of diplomacy, development, and defense] provide an illusion of depth and vitality that hides the blurry, overlapping reality of civil-military working relationships – just like the 3-D glasses worn at the movies.

Last month, having donned specially filtered glasses, millions of Americans emerged from the Great American Eclipse utterly spellbound, but with their eyesight intact.  Meanwhile, in Washington, foreign policy specialists contemplated the passing of another kind of vision that has dazzled policy makers from both parties for over a decade.

In the early 2000s, senior officials in the George W. Bush Administration introduced a so-called “3D” perspective on foreign policy, which emphasizes Diplomacy and Development, alongside Defense, as critical elements of U.S. national security.  The 3D vision centers explicitly on collaboration among the Department of Defense (DOD), the Department of State (DOS), and the U.S. Agency for International Development (USAID).  Seen through a 3D lens, these profoundly different organizations work as a team, achieving goals through a unity of effort rather than an explicit, unified command authority.   The Obama Administration adopted the 3D rubric wholesale, even formally revived congressional support for foreign assistance, upgrades to U.S. diplomatic security, and even modest increases in Foreign Service personnel stationed abroad.

However, to its critics, the 3Ds provide an illusion of depth and vitality that hides the blurry, overlapping reality of civil-military working relationships – just like the 3D glasses worn at the movies.  In its most significant real-world proving grounds, Iraq and Afghanistan, the 3D approach never achieved policy makers’ ambitions.  The core 3D experiment – a “civilian response corps” of administrators, engineers, and governance experts – largely failed to materialize, leaving a legacy of confusion about nation-building.  Perhaps as a result of these failures, President Donald Trump’s first budget request proposed a 31 percent reduction in diplomacy and development, with an almost dollar-for-dollar increase for defense.

So are the 3Ds an illusion whose time has passed?   Not necessarily.  Few regions epitomize the promising and positive effects of 3D cooperation more than Sub-Saharan Africa, where the creation of the U.S. Africa Command (AFRICOM) on October 1, 2007, ushered in profound changes to the pursuit of American national security interests in the region. Earlier this year, I interviewed dozens of DOD, DOS, USAID representatives about how civilian-military relationships have evolved in Africa since AFRICOM’s inauguration. Most agreed that despite some initial missteps, AFRICOM and its subordinate commands – most notably the Special Operations Command for Africa (SOCAFRICA) – have learned to work constructively alongside civilian agency counterparts, and vice-versa.

So how did AFRICOM win the hearts and minds of its ornery interagency colleagues?  First, by adapting work styles to meet country teams on their own turf; and second, by shaping headquarters operations to provide a critical strategic platform that the civilian agencies hadn’t realized they lacked.

When in Ouagadougou… I’ll Do As You Do

Although mightiest of the three Ds, defense is the new kid on the block in Africa.  For decades, the emissaries of diplomacy and development on the continent toiled away in relative obscurity from the worry-warts inside the Pentagon.  For DOS and USAID, the locus of coordination, policy making, and agency culture has always been the U.S. embassy country teams.  Under the authority and leadership of a designated chief of mission, generally the U.S. ambassador, the country team’s agency representatives collectively manage bilateral diplomatic and foreign assistance relationships with each partner nation.  In Africa, although many country teams included a defense attaché (DATT) focused on security relationships, diplomatic and development concerns predominated.  For many years, the symbol and substance of America’s presence in Africa was the Peace Corps volunteer, the missionary, the non-profit agricultural researcher, and the humanitarians who showed up when disaster struck.

Collaboration among defense, diplomacy and development has emerged as a notable success in Africa.  … Yet, without a continued commitment to unified action, each of the 3Ds is likely to revert to its core preferences and competencies, forgetting how to work together as they did after Vietnam.

Then came AFRICOM, and with it, suspicions about America’s geopolitical designs in the region, in particular ensuring U.S. access to oil and other raw materials, which Africa has in great supply.  Understandably, the diplomatic and development communities were loath to jeopardize their relationships in Africa by associating too closely with the new command.  These qualms persisted despite growing concerns about terrorism, organized crime, and violent extremists in Africa.

Given AFRICOM’s intent to work “by, with and through” African and interagency partners, the Command’s leadership sought to demonstrate deference to country teams, and ambassadors in particular.  Many chiefs-of-mission initially felt compelled to limit and constrain defense-related activities until their political effects could be better understood.  In interviews, foreign service officers repeatedly cited the need for their military counterparts to “get over” Iraq and Afghanistan – conflicts whose operational tempo, counterinsurgency focus, and kinetic conditions bled over into AFRICOM’s initial approach to the region.  Despite a handful of foreign area officers and DATTs with Africa experience, most military officials arrived with a “kinetic mindset” ill-suited to local realities.  “Initially,” said one former political advisor, “they were unable to see that we didn’t ‘own’ the conflicts most of our African partners were engaged in.”  Complicating matters was the lack of mass and persistent presence:  in the words of a former commander, “civil affairs teams and other operators in Africa were mere pinpricks on the map.”  They had neither the manpower nor the knowledge to engage as effectively with local populations as their civilian counterparts, on the ground for decades before them.

Over time, the benefits of bilateral security force assistance programs and regional security exercises such as Flintlock broke down barriers; they also made defense officials more familiar with how country teams operate.  Meanwhile, through trial and error, AFRICOM staff developed workable procedures for coordinating with civilian counterparts.  For example, after some initial bad experiences, USAID representatives in Africa sought and gained the authority to approve DOD-funded humanitarian assistance and civic aid projects.  A USAID foreign service officer who served in East Africa a decade ago stated, “Civil Affairs teams eventually learned that their one-off projects were less likely to win hearts and minds if they weren’t lashed up with our own efforts.  It only takes one experience of seeing a school you built left abandoned, and occupied by goats, to realize that coordination with the civilian agencies is worth the trouble.”  As a result, USAID now provides Civil Affairs teams with a list of potential schools, wells, and other infrastructure projects in their areas of interest, which the government and donors have agreed in advance to support and maintain.

Ask Not What Your Civilian Agency Partners Can Do For You…

While adapting to country team structures on the ground, the combatant command itself has evolved into a platform for 3D integration writ large.  DOS and USAID are highly capable in country, but have difficulty analyzing, planning and executing activities that transcend borders – as many African security threats do.  Although both agencies have regional bureaus in Washington, and can utilize tools like special envoys (for the DOS) and sub-regional mission platforms (for USAID), these structures have limited capacity and ambiguous command-and-control relationships with bilateral ambassadors and USAID mission directors.  Moreover, neither agency has traditionally received enough resources for embassy and USAID mission personnel across the region to meet regularly and share information on trans-border threats.

AFRICOM’s appearance created new opportunities.  To highlight its commitment to 3D coordination, the Command created a billet for a senior DOS Foreign Service officer of ambassadorial rank to serve as the deputy to the commander for civil-military engagement.  Meanwhile, USAID mobilized a senior development advisor with direct access to the command group for development issues, as well as a humanitarian assistance advisor to coordinate disaster relief.  Both the DOS and USAID created additional liaison positions within the planning staff, where they work directly on 3D coordination.  For example, the USAID deputy development advisor has alternatively served as the Command’s director of Overseas Humanitarian, Disaster Assistance, and Civic Aid (OHDACA) planning, or as the proponent for defense institution building activities.  These are both areas where AFRICOM’s and USAID’s resources and activities often overlap.

Just as important, AFRICOM has assisted its civilian-agency counterparts in overcoming their own regional coordination challenges.  At the most senior level, former AFRICOM Commander General David Rodriguez pioneered an annual “Africa Strategic Dialogue” (ASD) meeting with his DOS and USAID counterparts.  Now held in Washington each fall, this day-long, 3D discussion serves as a venue to debate and find common ground on Africa regional security issues.  In addition, AFRICOM rebranded and retooled its annual “Promote Cooperation” event – which updates and validates the Command’s theater campaign plan – into a full-fledged, 3D Africa Strategic Integration Conference (ASIC).  Held a few months after the ASD, near AFRICOM headquarters in Stuttgart, Germany, the ASIC involves not only DOD equities, but also senior DOS and USAID representatives from dozens of Africa-based country teams and Washington regional bureaus.  ASIC allows each agency to meet on its own, on the sidelines of the 3D discussions, to develop regional approaches to national security challenges and opportunities.  Thus, despite its growing pains, AFRICOM has become a vital and valued promoter of 3D collaboration at the strategic, operational, and tactical levels.

You Say You Want an Evolution

With the fate of 3D collaboration now uncertain, what insights can policy makers gain from AFRICOM’s first ten years?

First, the 3D experience in Africa provides a counterpoint to the narrative of 3D failure in Iraq and Afghanistan.  While the imbalances in capacity, resources, access and commitment among the 3Ds in those conflicts were vast, they have not been typical of the U.S. response to fragile states.  More often, as in Africa, the three Ds have come together as relative equals, sorting out approaches that create a unity of effort where no unity of command exists.

Second, interagency coordination requires huge expenditures of time, effort, and energy to build trust and cross bureaucratic and cultural barriers.  One veteran Air Force officer who later worked for USAID saucily described 3D coordination as “an unnatural act performed by non-consenting adults.”  His point was that agencies will not coordinate unless they absolutely have to – and they have had to in Africa, where the United States aims to help partner nations prevent, address or recover from crisis.

Third, the 3D point of view broadens the options available to policy makers in a complex world.  While some priority threats require decisive responses, others require finesse and deliberation.  Still others require consensus building or subtle, long-term support.  In Africa, the 3Ds put all these possibilities, and others, on the table.

And so, collaboration among defense, diplomacy and development has emerged as a notable success in Africa, one of the toughest areas of the world to promote U.S. interests.  After more than a decade, these investments are now sunk costs; most of the hard work has already happened.  Yet, without a continued commitment to unified action, each of the 3Ds is likely to revert to its core preferences and competencies, forgetting how to work together, as they did after Vietnam.  As any smart eclipse-watcher knows, making use of the lens you have – even if it isn’t the perfect way to see things – is better than going blind.

U.S. Army Lt. Col David Sigmund greets a young boy after passing out soccer balls to local children during exercise Flintlock 2007 in Bamako, Mali, Sept. 4, 2007. The exercise, which is meant to foster relationships of peace, security and cooperation among the Trans-Sahara nations, is part of the Trans-Sahara Counterterrorism Partnership. The TSCTP is an integrated, multi-agency effort of the U.S. State Department, U.S. Agency for International Development and the U.S. Defense Department.