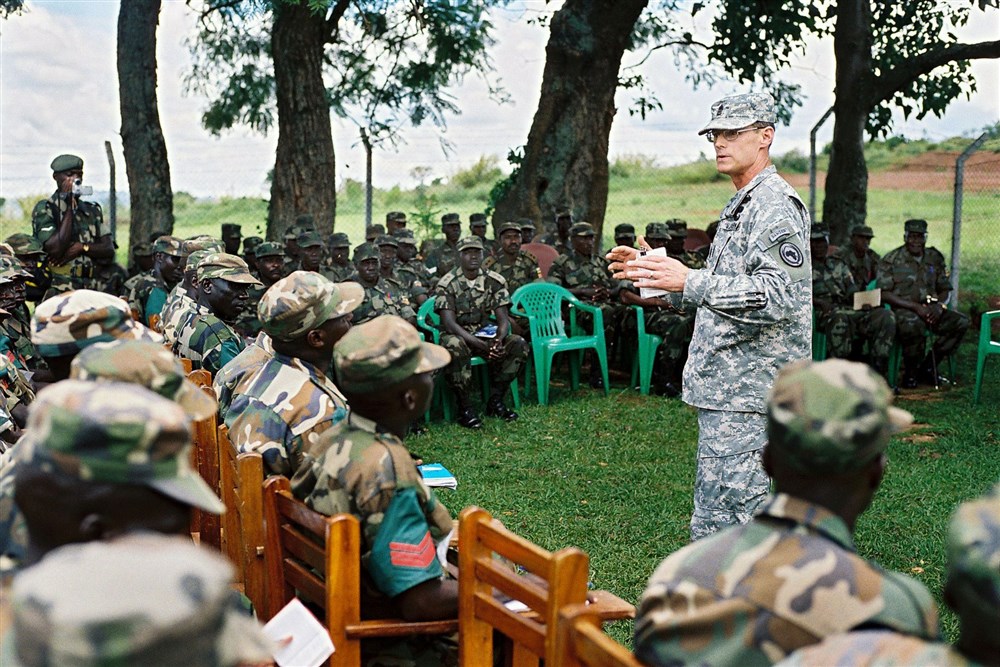 Success stories [IN STRATEGIC COMMUNICATION] do exist. The formation of the U.S. Army’s African Command (AFRICOM) was … a case of turning the communication environment from open hostility to general favorability in two short years.

It is very easy to bash the U.S. government and the U.S. military for strategic communication failures. From bad messaging to poor execution, the U.S. has a less than stellar track record. In 2004, a Defense Science Board Task Force admitted as much and provided a long list of recommendations. But five years later, the Chairman of the Joint Chiefs of Staff, Admiral Mike Mullen, “blasted” the U.S. strategic communication effort in Afghanistan, stating the U.S. was “losing the war of ideas.” More recently, the State Department’s online campaign against the Islamic State in Iraq and Syria (ISIS) is “in turmoil” because U.S. communications are not seen by audiences as credible, and the messages and strategic direction are unclear and constantly changing.

Sometimes it seems the U.S. just cannot get it right.

But success stories do exist. The formation of the U.S. Army’s African Command (AFRICOM) was one – a case of turning the communication environment from open hostility to general favorability in two short years. How did this happen, and what are the lessons?

When President Bush announced the creation of AFRICOM in February 2007, the political environment was not favorable. Critics questioned the timing of the announcement, the motivations of the Administration, and the mission and purpose of the new organization. The late New Jersey Representative Donald Payne, one of the most knowledgeable and passionate congressional experts on Africa, said at the time, “because there has been so little attention given to Africa…[a]ll of a sudden to have a special military command, I think the typical person would wonder why now and really what is the end game?”

Outside the U.S. government, numerous critics of the Bush Administration decried the move as a ruse toward securing (or stealing) African resources, imposing neo-colonial rule over the continent, and invading Africa through the slow construction of a “burgeoning U.S. military presence in the region.” Others believed that the U.S.’s real intentions were to protect its oil interests, steal other African resources, or prevent other powers’ access to them. This charge gained in intensity because Department of Defense (DoD) officials wanted the new command’s headquarters stationed in Africa and unfortunately allowed deliberations about the headquarters’ final location to continue in public.

Meanwhile, African society openly distrusted militaries in general, fueling negative reaction to President Bush’s announcement. Since 1952, 175 attempted coups have occurred in Africa, of which 75 succeeded. Several resulted in military leaders taking control and instilling authoritarian rule. Also common were elite “Guards,” military or paramilitary units who served a state’s ruler and functioned separately from the military chain of command. These units often played destabilizing roles, turning on their rulers or turning on their own people. Human rights violations by soldiers were also a major problem, leading a United Nations commentator to assess, “[w]ith little civilian oversight or public accountability, soldiers and police routinely were able to get away with the worst abuses.” Unsurprisingly, some Africans saw AFRICOM as a U.S. tool to prop up repressive regimes friendly to U.S. interests.

AFRICOM also had few friends domestically. Other U.S. government agencies openly worried about a continuation of trends toward “militarizing foreign policy,” with DoD’s ample resources far exceeding those of other agencies. Two-time former U.S. Ambassador to Africa Edward Marks asked, “[h]ow can we adopt a whole-of-government approach by putting it in uniform?”

By 2010, engagements with stakeholders no longer focused on the old criticisms, but instead what the command could do next.… this did not mean some critics’ minds were permanently changed.

The Government Accountability Office questioned whether the command’s establishment could be completed in such a short time (only 18 months) and result in an effective organization. At the time, the U.S. military was still embroiled in two wars, and AFRICOM would require funding, manpower, and resources from across the DoD to stand up the command.

AFRICOM’s first commander was U.S. Army General “Kip” Ward, and leading the communication campaign was his first priority during those early years (Although a DoD inspector general investigation would later find him in violation of ethics regulations, the matters of that investigation were unrelated to his leadership of the communication campaign). The major components of the campaign were asserting the command’s identity, leveraging the on-going activities it inherited to demonstrate its soft-power focus, and stay consistent. The goal was to change partners’ minds over time.

Asserting Its Own Identity

A key step for AFRICOM was to distance itself from what others had communicated about it. It then asserted its own identity, which General Ward described as a “listening and learning” organization. He also described AFRICOM as a “command under construction,” claiming considerable flexibility to shape it to serve the needs of DoD and African partners. General Ward expressed this flexibility via the following four themes:

These messages permeated all communications of the fledgling headquarters, including media engagements, briefings with U.S. and African stakeholders, and mass communications. However, unlike DoD officials who also promoted the command, AFRICOM chose not to confront or deny the criticisms directly. Instead, AFRICOM relied on program execution to show proof of its identity claims.

AFRICOM very quickly appropriated programs and exercises that it inherited from other combatant commands and aligned them against their messages. Some examples:

Africa Partnership Station (APS). APS was a program to help nations in the Gulf of Guinea region build maritime security capacity. Illegal fishing, trafficking, and piracy flourished where Africans navies lacked the ability to control their territorial waters. Non-governmental organizations were not sufficiently robust to build the civil infrastructure necessary to combat the problem. Consequently, in a 2006 conference in Benin, the Gulf of Guinea nations formally requested assistance from the United States.

AFRICOM quickly adopted APS as its own program. APS first deployed in October 2007, making stops in eight Gulf of Guinea nations. Several European sailors and members of non-governmental organizations traveled along to conduct humanitarian activities concurrent with the military training. Thus, AFRICOM claimed APS as an example of listening and responding to the requests of African nations.

Partnerships with the Department of State. Two active partnerships with the Department of State allowed AFRICOM opportunities to demonstrate its subordinate role to civilian authority. One was the African Contingency Operations and Training Program to build the “capacity of African partner nations to participate in worldwide multinational peace operations.” Another was the Trans-Sahara Counterterrorism Partnership (henceforth, “the Partnership”), a “multifaceted, multi-year strategy…to assist partners in West and North Africa increase their immediate and long-term capabilities to address terrorist threats and prevent the spread of violent extremism.” Also involving the U.S. Agency for International Development (USAID), the Partnership embodied the so-called “3-D approach” in which defense, diplomacy, and development served as complementary lines of effort in the Global War on Terror and other foreign policy challenges. The Partnership’s Exercise FLINTLOCK in Mali involved 10 African nations; 19 African nations participated in the African Contingency Operations and Training Program. AFRICOM leaders openly supported a State Department lead for the programs, quelling concerns about AFRICOM taking over their activities.

Combined Joint Task Force – Horn of Africa. In 2002, U.S. Central Command established Combined Joint Task Force – Horn of Africa (“the Task Force”)  in Camp Lemonnier, Djibouti, to confront terrorist groups in the region. When no immediate large-scale terrorist threat materialized, the Task Forces’s activities shifted to humanitarian assistance and civil-military operations. But, a 2007 critique of the Task Force described several failed military-led projects and expressed concern over mixed messages between those projects and the U.S.’s global anti-terrorist operations. Moreover, the Task Force’s growing conflict prevention mission initially caused the Department of State and USAID officials to “feel like their turf’s being invaded by the gun-toting crowd.” Officials also complained that some Task Force activities were not fully coordinated with U.S. embassy country teams. AFRICOM’s response was swift and direct, celebrating the task force’s positive work, while stressing the preeminence of Chief of Mission authority in approving and directing activities.

New Initiatives. AFRICOM also encouraged the bottom-up generation of new ideas and activities, and resisted exercising strong top-down control. The command’s messages empowered staff members to pursue small-scale initiatives. For example, AFRICOM’s first successful internally-generated program came from an Army major who recognized that partner nations were insufficiently trained to configure loads for air transport. Safety and security risks included dangerous interspersing of flammables with other military equipment on the same pallet. The major had assembled and coordinated a training program to correct the problem. The story fed a new AFRICOM campaign message about how little it takes to make a difference.

Programs First, All Else Secondary

By asserting its own identity and leveraging its inherited activities, AFRICOM successfully distanced itself from criticisms it did not earn. The discourse over U.S. neo-colonialism was an example: it distracted attention away from the new Command’s immediate operational goals. AFRICOM changed this dynamic by shifting the topic of conversation back to the programs it could offer to its African partners in support of whole-of-government priorities. General Ward stated during an address to an international military conference in February 2008 that AFRICOM would endeavor to support any reasonable request from Africans so long as it was consistent with U.S. foreign policy.

Many African militaries and other government agencies came to view AFRICOM as a legitimate and credible partner. By 2010, engagements with stakeholders no longer focused on the old criticisms, but instead on what the command could do next. The campaign had succeeded in changing the communication environment.

This did not mean some critics’ minds were permanently changed. Rather, they went quiet and waited for new opportunities to resume their arguments against the Command. A prominent opportunity was ODYSSEY DAWN, the military operation to enforce a no-fly zone over Libya in 2011. Although a UN Security Council Resolution justified it, some critics portrayed ODYSSEY DAWN as a unilateral act of U.S. aggression, playing on neo-colonial fears from the past. They decried “the devastating use of American military force with total impunity against Africa” that supposedly showed the commands true colors, charging that the operation will “breed greater anti-Americanism while draining much needed monies and threatening civilian lives, with each bomb dropped.”

Their arguments mostly fell on deaf ears. Rather, AFRICOM adapted its campaign to sustain its original messages about interagency cooperation and program focus while also incorporating lessons learned from ODYSSEY DAWN. Stakeholder relationships built over the previous years remained strong.

What the AFRICOM Experience Teaches

The resurgence of old criticisms demonstrated some important truths applicable to any communication campaign:

AFRICOM showed that quieting criticisms, even if temporarily, is evidence of success. But, it does not happen quickly and counternarratives remain burned into the global memory. Its purveyors will resurface them given the opportunity. Campaigns must therefore adapt to new realities, and leaders must avoid thinking in terms of absolute victory.

Former New York Times military correspondent Richard Halloran wrote, “[s]uccessful strategic communication assumes a defensible policy, a respectable identity, a core value.” From its beginning, AFRICOM crafted its narrative this way and stayed consistent with it through its first years. It stayed true to its identity – a diverse team that listened and learned from others and focused on building security capacity of African partners. Themes and messages from this narrative evolved but never deviated from the Command’s identity.

Critics succeed through the strong belief in their messages and the autonomy to promote them. So too must it be for the U.S. military, which too often exercises heavy, top-down control over its messaging. AFRICOM succeeded because it provided members with autonomy to enact the command’s messages. This minimized the risk of mixed messages as AFRICOM’s members engaged with partners.