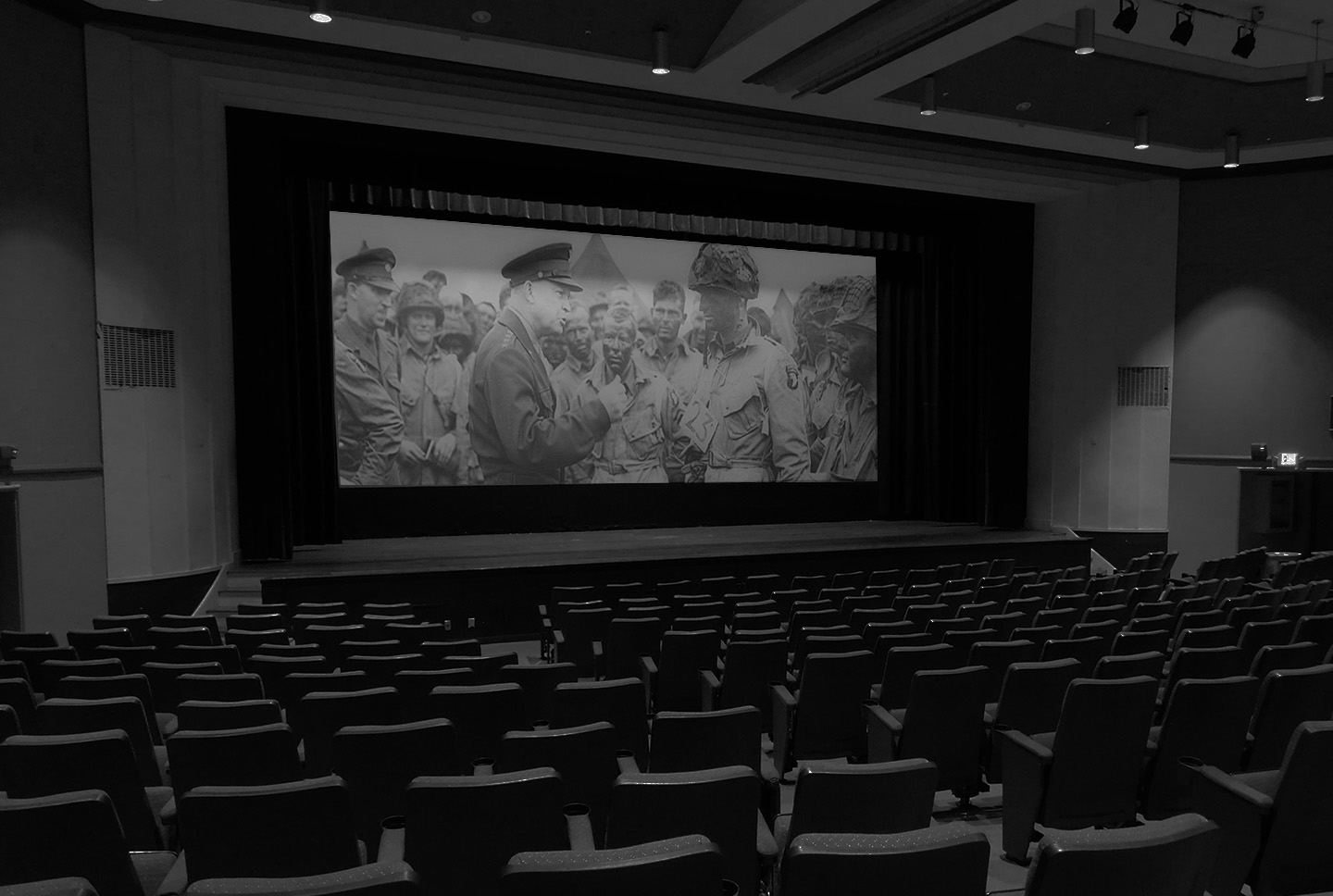 The over-arching leadership theme that ‘The Post’ so effectively conveys is the familiar choice between the harder right and the easier wrong.

As previous WAR ROOM releases show, film is a great means for learning about and discussing complex topics. In May 2018, Mark Gagnon talked to us about how one can learn about strategy using film. Then in last October, we welcomed Ryan Wadle to the studio to discuss cooperation and challenges between the military and the film industry. We also published an article by Jim Shufelt about the classic film “Tunes of Glory,” about military units in transition after World War II.

This time, we are bringing the subject of film to a Whiteboard. We asked some junior officers and various scholars about leadership as presented in film. Below is the specific question and their responses. We want to hear from you! Send us your 300-word answer to the below question, TO: thomas.p.galvin.civ@mail.mil, CC: andrew.a.hill13.civ@mail.mil, SUBJECT: Whiteboard #8. Also please provide us your one-line bio (rank and service for military, title and organization for civilians).

Deadline is 22 February 2019. Top responses will be released in an early March post. While we also encourage the use of the comment form, please understand that we will only accept e-mail entries for inclusion in the Whiteboard release.

The question we asked was:

Which movie would you recommend to new lieutenants (or maybe cadets, or high-schoolers?) to learn about leadership?

Despite the necessary transition of focus in the National Security Strategy to “great power competition” and “near peer conflict,” it is critical that the next generation of military leaders do not discard the lessons of counterinsurgency or forget the truly political nature of counterinsurgency environments. The Battle of Algiers, a 1966 film, brilliantly captures key lessons about leadership in counterinsurgency campaigns in a relatable and enjoyable medium.

Shot in an almost documentary style, the film portrays the anti-colonialist insurgents in their heroic struggle against the French. Despite total military defeat at the hands of the French counter-insurgents, led by “Colonel Mathieu,” a paratroop officer whose character is fusion of actual legendary French Airborne leaders and counterinsurgency philosophers such as Roger Trinquier and Jaques Massu, the Algerian resistance, known as the Front de Liberation Nationale (FLN), triumph. The parachutists’ counterinsurgency tactics, refined and ruthlessly applied after the French defeat in Indochina, are no match for the political appeal of the FLN and independence from French rule.

Junior officers should engage with The Battle of Algiers as a launching point for a wider interest in the moral, tactical, and strategic aspects of counterinsurgency campaigns. The film highlights the temptation of seemingly expedient responses, including gruesome torture. Young leaders should remember such actions risk compromising the entire strategic effort and place a heavy, and often unbearable, emotional burden on the counterinsurgents. Tactically, the film portrays vital lessons for junior leaders in counterinsurgency, such as the centrality of precise intelligence and the value of population control measures to mitigate the risk of escalatory inter-ethnic violence. However, as the film shows, no tactical action by the counter-insurgent, however effective, can overcome a superior political argument by the resistance.

I want to focus on an example of leadership in film more subtle and less obviously military than Band of Brothers or Saving Private Ryan.  Every junior military officer should study Meryl Streep’s depiction of Kay Graham in The Post.  Graham, who both owned and published The Washington Post from 1963 to 1979, was the first woman owner and publisher of a major American newspaper.  The film depicts her controversial and historical decision to continue publishing material from the classified “Pentagon Papers,” revealing the government’s role in misleading the American public over the United States’ involvement in Vietnam.

The over-arching leadership theme that The Post so effectively conveys is the familiar choice between the harder right and the easier wrong.  Publishing the story was potentially detrimental to Graham and her company.  Her (all male) attorneys and advisors fought against publishing as it could weaken her already tenuous position as the only female American media publisher.  Her friendship with Robert McNamara, implicated in the papers, and the Nixon Administration’s threat of legal action rounded out the arguments against publishing.  Graham polled her closest advisors, and against nearly all of their recommendations, decided that the public’s right to know outweighed the myriad of negative consequences to her and her paper. Consistent with the core values of her institution, Graham chose to publish the story.

Young officers will face similarly difficult decisions.  More often these decisions resemble Graham’s rather than the heavy-handed “don’t shoot the prisoner/report the war crime example common in modern war movies.”  Graham’s position will resonate with many officers who find themselves overwhelmed by a difficult decision and think themselves unqualified or unworthy to make such a decision.  These officers will do well to remember Graham’s example- you are equal to the task, trust your gut, and always take the harder right.

Military leaders ought to enter their assignments with perspective. … The training matters, but so does the recognition that lives are being altered

The Best Years of Our Lives (1946), DIRECTOR: WILLIAM WYLER

The film begins as WW2 ends and follows three men as they make their way back home to resume their lives as civilians. It is immediately obvious that war has changed them, and their families. This Academy Award winning film provides insight into the impact combat service has over the remainder servicewoman or serviceman’s life. Future military leaders need to spend some time with the truth that the actions they facilitate, in the field and in garrison, leave an impact on the women and men they command. The film also speaks to the power of friendship and the loyalties that persist well beyond any time spent wearing a uniform. Service members volunteer “the best years of their lives” to their country and spend the rest of their lives reconciling their service. The actions of officers can determine if these veterans look back with pride or with frustration and anger.

Military leaders ought to enter their assignments with perspective. Their actions and decisions have lasting consequences. The training matters, but so does the recognition that lives are being altered. People join for adventure, to perpetuate a family history of service, for a steady paycheck, or to create opportunities where none existed prior. This film provides a glimpse into how military experiences can color, or shadow, a veteran’s postwar life.

Beyond all of this, however, the movie is just plain good. Harold Russell won two Oscars for the same role. One for Best Supporting Actor and one for being an inspiration to other veterans. He lost both his hands in a training accident in 1944 when an explosive detonated. His story, in particular, ought to be required viewing for everyone in the armed forces.

The intensity of the movie is enough to parse out a few scenes to get into what the stresses of possible war outside of our current conflicts in Afghanistan and Iraq. It would be an easy segue into conversations about nuclear war, its morality, history and the role of a junior officer in that prism. Additionally, an idea would be to talk about loyalty. In the movie, there are conflicting loyalties and what are the responsibilities of being an XO. Leadership through means other than command.

My favorite movie, and a great example of mentorship between Sean Conner (JD Salinger inspired) and Robert Brown. The mentorship that the young basketball player gets, comes from a very unnatural place and shows how we need mentors to bring the best out in us. As junior officers, your mentors quite often won’t look like you. (Big sticking point for young officers/cadets of color who do not see themselves represented at the higher ranks).

Still a timeless movie but the beginning of it is the quintessential example of what a Platoon Leader and Platoon Sergeant relationship should be like between Tommy Lee Jones and Will Smith. The training, and quite cool collective approach while Will Smith makes all the mistakes but has to learn throughout the movie.

The Siege is a great movie about terrorism, but the main characters Bruce Willis and Denzel Washington highlight important issues about leadership in their respective military and civilian domains, the pressures, values and priorities involved in each, as well as the challenges and opportunities involved when they must work together in a moment of national crisis.  The nature of the civilian/military relationship is critical for all members of the military to consider as they are both members of the military community of practice, as well as citizens. The backdrop of terrorism, civil liberty concerns and to what degree Constitutional principles are malleable in the fact of other national security demands are all perennial issues worth considering for all leaders.

You’ve read their views. What’s yours? Send your 300 word (maximum, and we mean it!) response TO: thomas.p.galvin.civ@mail.mil, CC:  andrew.a.hill13.civ@mail.mil by February 22, 2019. Please submit with the Subject line as Whiteboard #8.

Photo: Interior of the Fort Leavenworth movie theater, Ft. Leavenworth photo; photograph on screen is General Eisenhower giving the order of the D-Day–“full victory-nothing else”–to paratroopers in England, just before they board their airplanes to participate in the first assault in the invasion of the continent of Europe. Both photos are public domain.