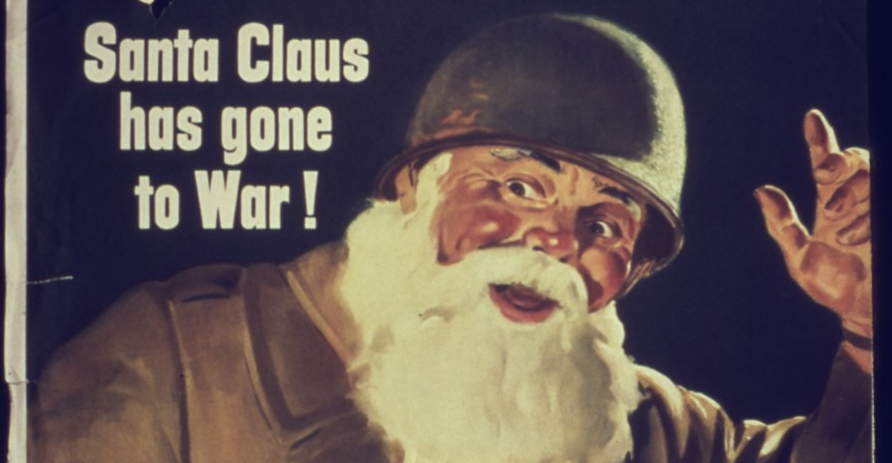 Finding yourself stumped in the search for an appropriate gift for the national security professional in your life? Winter holidays bring a host (perhaps too large a host) of gift-giving opportunities, and we here at WAR ROOM strive to bring you useful and timely content. Whether you’re looking for a gift to bring for a unit party, are on the hunt for one-last-thing, or have decided that the best way to ensure happiness on Christmas morning is to give yourself a gift, this list is for you.

The WAR ROOM editors have been hard at work (okay, maybe not that hard at work) curating the 2018 holiday gift list with a little help (attributed below) from colleagues and leaders at the US Army War College. We’re including links for purchasing where we can (usually to a manufacturer or publisher—we trust you can do your own online price comparisons), as well as relevant WAR ROOM content.

The Art of War: A Graphic Novel

Looking for a new take on a classic strategic text? Author Kelly Roman and illustrator Michael DeWeese offer a sweeping and visually stunning take on Sun Tzu’s classic text, set in a future where Wall Street is militarized and China the world’s dominant economy. And to help you contextualize, check out our podcast with Paul Kan on Sun Tzu as part of our series on Great Strategists.

All national security professionals need some Shakespeare in their lives.  The BBC productions of Richard II, Henry IV Parts I and II, and Henry V in The Hollow Crown: The Complete Series and of Henry VI in two parts and Richard III in The Hollow Crown: The Wars of the Roses are simply masterful. The Bard’s histories explore complex historical and political moments, questions of leadership, the horror and draw of war and combat, and even strategic problems. As an added bonus, you get to spend quality screen time with Benedict Cumberbatch, Judi Dench, Jeremy Irons, Ben Whishaw, and Tom Hiddleston.

Take a trip up to New York City and see it in person at the Metropolitan Museum of Art, New York City (or, if you’re on a budget, you can find a nice print). The United States’ #1 military strategist—General George Washington—depicted in a defining moment for him, his country and the military defending American aspirations.  The image is legendary and maybe a bit cliché, but, after you read David Hackett Fischer’s Pulitzer Prize winning book, Washington’s Crossing, you’ll understand why the painting and its subject deserve such stature. Learn more about George Washington as a strategist in our podcast with Len Fullenkamp and Andrew Hill in the first episode of our  Great Captains series.

Everyone needs desk toys! These fun variations on the classic Army Men toys will remind you and the people who come to visit your office to take time practice mindfulness, yoga, meditation, and focused breathing. How can these practices be beneficial to senior leaders? Find out more in this podcast on the neuroscience of mindfulness and focus with Amishi Jha and Buck Haberichter.

Feeling nostalgic for your schoolhouse days spent discussing definitions of strategy and thinking about how to represent complex ideas in simple terms? Former War College professor Art Lykke recalls that the image of strategy as a three-legged stool came to him in a dream. Your very own three-legged stool can serve as an ever-present reminder about aligning ends, ways, and means. You’ll have to figure out on your own where risk comes in. Dig deeper into the question of how we use models and metaphors in understanding strategy with this throwback War Room article.

What better way to demonstrate your love of maps, strategy, data, weather, and military history than with a print of Charles Joseph Minard’s iconic visualization of Napoleon’s march to Moscow? Data visualization expert Edward Tufte called it, “probably the best statistical graphic ever drawn.” It shows in devastatingly clear terms the size of Napoleon’s army on its advance and retreat, the brutally-cold winter temperature, and the routes of march. It’s sure to warm the hearts of family members large and small, and an iconic piece for any strategist or military historian.

This gift suggestion is courtesy of Dr. Mark Duckenfield, Chair, Department of National Security and Strategy, US Army War College

The Feast of the Goat by Mario Vargas Llosa

Continuing our journey into darkness, Peruvian author and Nobel laureate (2010) Mario Vargas Llosa explores the legacy of toxic leadership and its political implications in an edgy and insightful novel about Trujillo’s rule in the Dominican Republic Definitely an interesting and important read, but be warned that it’s perhaps not light vacation-reading fare.

Battlefield staff rides are an essential tool in the strategist’s toolbox, useful for illuminating strategic questions, examining decision-making, and exploring ideas about leadership. While you’re out, though, be sure to take care of yourself–hydrate, dress for the weather, wear sunscreen and sensible shoes, and take a hat! Learn more about the significance of staff rides to strategic education in this podcast with Len Fullenkamp and Andrew Hill.

Should you concentrate your armies in Australia? Consolidate power on the European continent? Attack? Defend? Take a trip back in time with this classic strategy board game.

Games have long been an important aspect of strategic education. Want to learn more? Take a look at this article by Brad Hardy, which explores how games are incorporated into Professional Military Education programs.

Do you have friends trying to effect positive, lasting change in the Leviathan of the DoD? This is the perfect gift for your favorite national security professional currently beating his or her head against the wall of the Pentagon bureaucracy. Help them do so more safely with this handy wall foam. (Also available in Air Force Blue, Marine Red, Navy Blue, and “I give up” Black.) Read more about surviving the military bureaucracy in one of WAR ROOM’s most popular articles, “How to win an argument in the Pentagon.”

Does everything seem like a gamble? Do you need a little more chance and uncertainty in your life? Perhaps it’s time to turn to one of the iconic toys from childhood for help. You: “Was Clausewitz correct about the nature of war?” Magic 8 Ball: “Reply hazy. Try again.”

What strategist doesn’t need to be familiar with intelligence, spies, and deception? This classic Cold War board game is easy to play, but full of intrigue as players try to conceal their identities and collect classified information. For a real-world take on the significance of intelligence to national security and strategy, check our our Intel podcast series.

Prussian theorist Carl von Clausewitz gave us a host of metaphors for thinking about strategy—a duel, a chameleon, commerce, walking through water—but one of the most enduring is his likening the forces of the remarkable trinity (“primordial violence, hatred and enmity”; “the play of chance and probability,” and the “element of subordination, as an instrument of policy”) to a toy in which a magnet is suspended between three other magnets. A conversation-starter for any strategist, and a handy way to remember Carl’s (and Marie’s) theory of war. Learn more about Clausewitz in our podcast with Vanya Eftimova Bellinger as part of our series on Great Strategists.

The Twenty Years’ Crisis, 1919-1939: An Introduction to the Study of International Relations, by Edward Hallett Carr.

Tired of holiday dinner arguments about whether the world functions according to liberal or realist principles? This book is a gem of clarity about international relations, and has stood the test of time magnificently. The first two chapters provide an especially valuable summary of tensions between values and interests in international relations. His treatment of “Utopia and Reality” (his terms) is a wonderful argument for the necessity of both.

Take a trip down memory lane with this series from the 1980s. Follow the adventures of Duke, Scarlett, Snake Eyes, Flint, and Lady Jaye as they defend freedom against the ruthless Cobra organization and Serpentor, the Cobra emperor cloned from the DNA of history’s greatest military minds. Need to brush up on that? Check our our podcast in the Great Captains series on Hannibal, featuring GK Cunningham and Andrew Hill.

Joan of Arc by Mark Twain

Although Mark Twain is best known for his humorous accounts of life in frontier America, he also wrote this fictionalized account of the life of Joan of Arc, one of history’s greatest heroes and perhaps the all-time supreme example of the power of charismatic leadership. Twain considered it his greatest work, and we’re inclined to agree. Indeed, we chose to bring Joan back from the dead for our “Zombie Generals” Halloween whiteboard.

It’s the gift that keeps on giving to others. Give someone you love a lifetime membership in the USAWC Alumni Foundation, or get it for yourself. The Foundation funds great programs such as scholarships and the War College’s annual National Security Seminar. (It also supports WAR ROOM. Thank you!)

The Last Place on Earth: Scott and Amundsen’s Race to the South Pole, Revised and Updated by Roland Huntford

Think your boss is incompetent? You may feel better after reading this history of the greatest competition in polar exploration, the race between expeditions led by the British Captain Robert Falcon Scott and Norwegian Roald Amundsen. A great work of historical revision, Huntford systematically dismantles the legend of Scott, exposing him as reckless and incompetent. His conclusions about the nature and character of leadership are both enlightening and unsettling. For insights from today’s senior leaders, listen again to the Senior Leader Perspectives podcast series.

The Life and Death of Colonel Blimp

The perfect gift for the movie buff in your life, this British masterpiece by Michael Powell and Emeric Pressburger chronicles forty years in the life of fictional General Clive Candy, who watches the military profession he loves transformed by the tragedy of two World Wars. Starring Roger Livesy as Candy, Anton Walbrook as a Prussian officer who becomes an enduring friend, and the luminous Deborah Kerr (in more than one role), this is a moving and funny exploration of life of military service. Since we’re on the subject of the military profession, revisit one of WAR ROOM‘s most popular articles here, exploring the “Seven Deadly Sins of Army Mentoring”.

“I, for one, welcome our new robot overlords,” binary T-shirt

Sporting this diplomatic shirt, nobody will be better prepared than you are for the coming artificial intelligence apocalypse. Need to get more freaked out about A.I.? Read on…